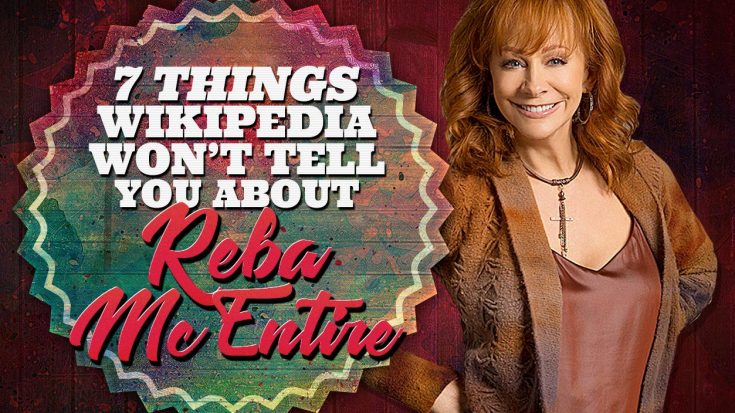 Whenever you want to learn some fast facts about your favorite country singer, we have a pretty good idea which website you visit…Wikipedia. The online encyclopedia is a treasure trove for people who want to know when a certain country artist was born, when they signed their first record deal, or what they named their kids.

However, even the most detailed of Wikipedia pages lack some of the most interesting details about a country artist’s life and career. If you want to learn some unique facts about one of country music’s leading ladies, you won’t find them there. But you will find them here…

The leading lady we’re talking about is none other than Reba McEntire, a country music superstar, actress, producer, and more. We’ve dug through years worth of interviews with McEntire to bring you some intriguing facts about her that you won’t find anywhere on her Wikipedia page.

Want to learn what those facts are? Cruise on through this list to check them out!

1. She Likes To Collect Demo Recordings

During an interview with Yahoo! Video, McEntire was asked if she tends to keep a lot of songs on hold. In the music industry, when an artist has a song on hold it means that they have, in a sense, reserved that song so they can record it at a later date. As long as the artist has a hold on that song, no one can record it until the hold is lifted.

In her answer to the question, McEntire revealed that she doesn’t tend to hold on to songs in the business-like sense. Instead, she says that she has a habit of collecting and holding on to demo tapes she enjoys.

“I’ll keep songs, I’ll keep CDs, I’ll keep cassettes…I’ve kept songs, I bet thirteen years old,” she said. Not on hold, just songs I like. I don’t know if it’s the demo or if it’s the singer. I’ve got songs of [“Does He Love You” duet partner] Linda Davis‘ that she sang demos on for gosh, twenty years.”

That’s a long time to hang on to a song!

2. She Dedicates All Of Her Shows To God

Shortly after losing eight of her band members in a horrific plane crash in 1991, McEntire sat down with E! News for the above interview. Right off the bat, the interviewer asked McEntire what she thinks about right before she goes out on stage.

While some artists simply think about calming nerves, or listen to music to get hyped up, McEntire said her pre-show thoughts are different. As she shared, before she goes out on stage she always “dedicates” her show to God.

“The last two, three months, everybody’s had this flu bout going around,” McEntire said in her interview with E! News. “So I thank him for my health, I thank him for us being able to be in front of that many people, to do what we love to do and have such a good time. And Lord please don’t let me forget any songs!”

While this interview was some time ago, we have a feeling McEntire maintains the same ritual today.

In 2017, McEntire gave a brilliant gift to all country fans when she agreed to host the CMA Country Christmas special. But when it comes to asking for gifts, McEntire makes simple requests.

During an interview with Taste of Country, McEntire shared that she has a tendency to ask for practical gifts. In fact, she said that one year she asked for a windshield wiper washer, of all things.

“One Christmas I asked for a windshield wiper washer,” she said. “You know those things that you see at the filling stations, where they got the scrubber and they also got the thing with the windshield wiper fluid in it? ‘Cause I love a clean windshield when I’m driving. So I got two of those one Christmas.”

That’s one thing you definitely aren’t gonna find tucked in with all of the facts on McEntire’s Wikipedia page!

4. Vince Gill Once Offered To Play In Her Band

As we mentioned earlier, eight of McEntire’s band members were tragically killed in a plane crash in 1991. McEntire was overwhelmed with grief following the crash, but her faith helped pull her through.

After losing eight of her band members, McEntire was left with the painful task of finding new musicians to play with her. Something you won’t see mentioned on her Wikipedia page is the fact that Vince Gill offered to be part of her band.

During an interview with Larry King in 2005, McEntire spoke about that generous offer Gill made to her all of those years ago.

Two years after the crash, Gill was right by McEntire’s side at the top spot of the Hot Country Songs chart, which they reigned over with their duet, “The Heart Won’t Lie.”

5. She Admits That Money Has ‘Driven’ Her In The Past

While being interviewed by her good friend Kix Brooks for his radio show, McEntire admitted something you don’t usually hear artists say. She openly confessed that in the past, the whole idea of fame and fortune served as a major motivating force for her.

“You know, money has driven me a lot,” she said. However, she noted that the reason she wanted money wasn’t because she wanted to buy a ton of stuff, but because she grew up without much money, and always dreamed of what it would be like to have more. As time passed, she said she realized that it was the experiences she got to have as an artist and actress that mattered most, not the money she made.

“I grew up with not having a lot of things that I thought I wanted,” she said. “And then when you get to making money, then you buy that stuff and you think ‘crap that’s just a bunch of stuff.‘”

She speaks the truth you know!

6. The First Song She Ever Sang In Public Was “Away In A Manger”

Leading up to the 2017 CMA Country Christmas special, McEntire sat down for an interview with TV Insider to talk about all things Christmas. When asked if she sang in school Christmas programs as a child, McEntire revealed her first public performance was of a Christmas song.

“The first time I was ever behind a microphone, I sang “Away in a Manger” in the first grade at our Kiowa, Oklahoma, Christmas program,” McEntire said.

Years later, McEntire recorded “Away in a Manger” for her first Christmas album, Merry Christmas to You.

For years, McEntire has worked with Dillard’s to design her own clothing line. While many of the pieces are flashy like her stage outfits, McEntire has admitted that she doesn’t wear such clothes during her everyday life.

While speaking to Parade about her clothing line, McEntire said that on an everyday basis, she usually wears simple pieces in dark colors. “If I only put what I personally wear in the Reba line, it would be pretty boring,” she said. “In my daily life, I almost only wear dark clothing and I hardly ever wear a print.”

But McEntire’s stage outfits have a lot more pizzazz, and its from those outfits that her designers draw inspiration for the pieces that go into her clothing line. “So it’s almost like my fans can wear the clothing right out of my closet,” she said.

We know Wikipedia would never tell you about McEntire’s preference for dark clothes over prints and flashy designs!

Which one of these facts ended up surprising you the most? We’d love to hear from you, because we found each one to be quite intriguing.