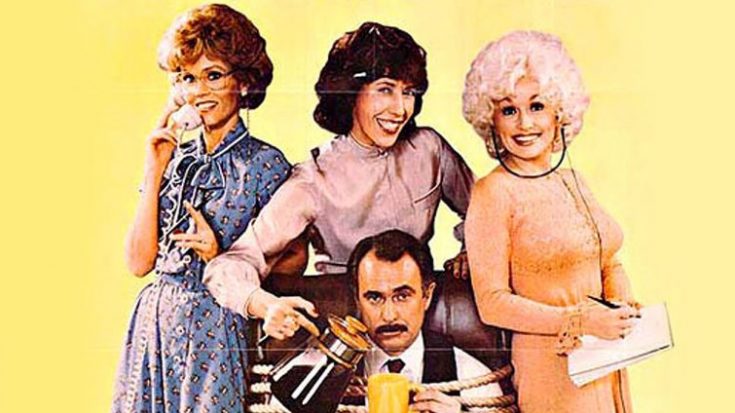 The 1980 film 9 to 5, starring Jane Fonda, Lily Tomlin, and Dolly Parton, tells the story of three working women who live out their fantasies of getting even with their “sexist, egotistical, hypocritical bigot” of a boss.

The women eventually overthrow their boss after kidnapping him and holding him hostage in his own house.  While he’s gone from work, the women implement new policies around the office that benefit everyone, including day care, flexible hours, equal pay, and a job-sharing program.

The movie is hilarious, well-written, and for good reason, is ranked No. 74 on the American Film Institute’s list of the top 100 funniest movies in American cinema.

While fans of the movie have probably seen it 100 times, there are still some things we don’t know about it. Let’s take a look at 7 things y’all might not know about 9 to 5!

1. The Lead Roles Were Written For Tomlin, Fonda, and Parton

Screenwriters often write roles in their movies with an actor serving as inspiration, but it’s rare when you actually get that actor to play the part. Patricia Resnick, who wrote the movie with Colin Higgins, had Jane Fonda, Lily Tomlin, and Dolly Parton all in mind when they were writing the film. Jane Fonda was already attached to the film because, well, it was her idea! She then handed the reigns off to Resnick and Higgins.

“We had Jane for sure, because it was her idea to do the film and it was her production company,” Resnick told Rolling Stone. “It was written for Dolly and Lily, but we did not have them under contract. We really wanted them, but we did have some backup ideas in case they turned us down. For Lily, it was Carol Burnett, and for Dolly, it was Ann-Margret. But I had Dolly, Lily and Jane in my head the whole time, and we were really hoping that’s who it was going to be.”

As luck would have it, Tomlin and Parton accepted the roles of Violet and Doralee, respectively.

Can you imagine someone else playing Violet? We sure can’t. Carol Burnett is very talented, but no one could have been as hilarious as Tomlin was in this role. It wasn’t because she didn’t like the script, though. She was just working so much; she wanted to give herself a break!

“I turned ‘9 to 5’ down originally. I was shooting ‘The Incredible Shrinking Woman’ and I was so overworked,” she told the UK’s Evening Times. “I’d worked for seven months on that movie, so I was ready to just shut my eyes to anything else. My partner Jane said to me, ‘This is the biggest mistake of your life. You’ve got to get on the phone and tell Jane Fonda you want to take back the resignation’.”

Tomlin took her now-wife’s advice and begged for the job back, and she is so happy she did.

“I am grateful that I did it. [Jane Fonda & Dolly Parton] became two of my good friends, you know.”

3. Dolly Wouldn’t Star In The Movie Unless She Could Write The Theme Song

According to The Guardian, Parton got her self-confidence from all her brothers and uncles who taught her everything there is to know about men.

“I understood the nature of men and I didn’t go in there feeling all intimidated,” she said. “I just went in there and said: ‘Hey! I have a good product here and we can all make some money here if y’all wanna get involved with it.’”

This same self-confidence helped her when she refused to let Elvis Presley record her iconic song “I Will Always Love You”, and again when negotiating for 9 to 5. Parton leveraged her skills as a songwriter and agreed to star in the movie, but only if she could write the theme song.

Her song “9 to 5” earned Parton an Academy Award nomination and four Grammy nominations. It won in the Best Country Song and Best Country Vocal Performance, Female at the Grammys.

Once Fonda agreed to let Parton write the theme song for the film, she went straight to work! She wrote the song on set and used one of her famous body parts to help her.

In 2009, Parton sat down with the ladies of The View, and filled them in on a little secret about her writing process of the song “9 to 5.”

She said, “I wrote that on the set when we were doin’ the movie, I just watched the things goin’ on during the day, and I would just kind of do my nails and it sounded like a typewriter to me.”

Yes, you are reading that right. One of the funniest movies in cinematic history was initially supposed to be a drama!

“At first we were going to make a drama,” Fonda told The London Times. Fonda ran the production company responsible for the film, IPC Films.

“Any way we did it, it seemed too preachy, too much of a feminist line,” she continued. “I’d wanted to work with Lily [Tomlin] for some time, and it suddenly occurred to [producer] Bruce [Gilbert] and me that we should make it a comedy. It remains a ‘labor film,’ but I hope of a new kind, different from The Grapes of Wrath or Salt of the Earth. We took out a lot of stuff that was filmed, even stuff the director, Colin Higgins, thought worked but which I asked to have taken out. I’m just super-sensitive to anything that smacks of the soapbox or lecturing the audience.”

Even after the drama aspect was thrown out of the window, they re-wrote it to be a black comedy, but Fonda still thought it was too dark. We love the film just the way it is, so we’re glad it took the direction it did!

6. It Was Turned Into A TV Show And Later, A Musical

9 to 5 the movie had huge success at the box office. In fact, it was the highest grossing movie of 1980! Because of its success, it was adapted for the small screen and ran for five seasons!

Many years later, in 2008, the movie was developed as a musical in Los Angeles! It did so well that it was brought to Broadway and starred Allison Janney as Violet, Stephanie J. Block as Jusy, and Megan Hilty as Doralee. Dolly wrote brand new music for the 9 to 5 musical.

Watch a commercial for the musical in the video above.

9 to 5 was Dolly Parton’s film debut and learned a few things along the way. Instead of just learning her own lines, she learned everyone’s lines!

Parton was already super successful as a singer-songwriter, but had never even been to a set. The closest she had come to a movie set was the tour at Universal Studios!

“They just sent me the script and I memorized it,” Parton said in an interview with the Today Show. “I just assumed you had to. My part and [Lily’s] part and [Jane’s] part and Dabney’s part. But I just knew the script back and forth and every week I would read it … I would practice.”

“How were you in my part?” Lily Tomlin asked her, and she responded, “Oh, I was great!”

Watch her confession in the video above.