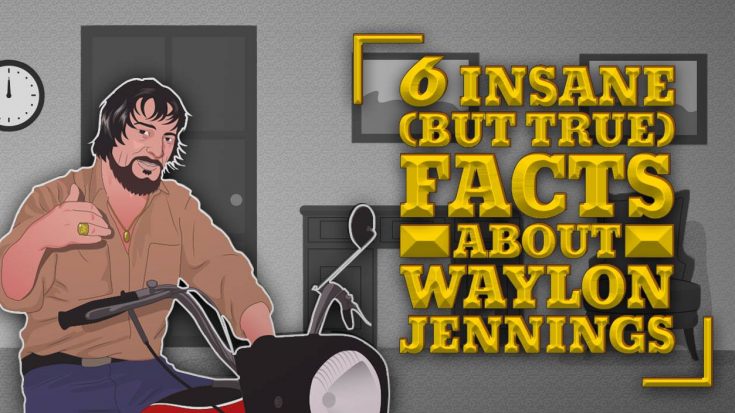 There’s certainly no shortage of those stories in Jennings’ history.

Some stories are ones you may be familiar with, as they inspired Jennings’ songs. Remember his hit “Don’t You Think This Outlaw Bit’s Done Got Out of Hand”?

Well, that was based on a wild, real-life story that involved DEA agents and cocaine being flushed down a toilet.

Other stories have flown under the radar a bit more, taking on an almost mythical status among hardcore outlaw fans. Like the story of how Jennings once made $25,000 just by taking a pee.

In other words, there are some insane facts out there about Jennings that sound crazy beyond belief. But they’re all true, and we have six of the rough and rowdiest stories to share with you right here.

1. He Rode Buddy Holly’s Motorcycle In A Hotel Room

Early in his career, Jennings played bass for the beloved singer Buddy Holly. The two became close friends, so Jennings was understandably devastated when Holly was killed in a plane crash in 1959.

Before Holly’s death, he had purchased an Ariel Cyclone motorcycle, which Jennings remembered vividly. Holly’s father kept the bike until 1970, but eventually sold it.

For Jennings’ birthday in 1979, two of Holly’s Crickets tracked down the motorcycle and decided to surprise him with it. When Jennings saw the bike, he did what any outlaw would do:

“I walked into my hotel room after the show and saw it sitting there,” Jennings wrote in his autobiography Waylon: An Autobiography. “What else could I do? I swung my leg over it, stomped on the kick starter, and it burst into roaring life. First kick. It was midnight, and it sounded twice as loud bouncing off the walls of that hotel room. I knew Buddy wouldn’t mind.”

We have a feeling that he wouldn’t have minded at all. But the guests in the other rooms may have!

2. He Walked Off The Set Of A Talk Show

Jennings didn’t like it when the powers at be would cut into his set lists, and he always made his displeasure known. Perhaps the best-known protest took place in 1998, when he walked off the set of Tom Snyder’s Late Late Show.

Let us set the scene for y’all…

So apparently, Jennings went in to the show and already wasn’t pleased with the way things were set up. He wanted the entire hour-long slot to himself, but learned he would be sharing time with another guest, Dr. Laura.

Already displeased, Jennings grew even more frustrated when Dr. Laura’s segment ran over into his own. Deciding he had enough, Jennings stormed off the set and left before he ever stepped in front of the cameras.

His exit left Snyder in shock, and he had to scramble to fill the remaining minutes of the show. “I have never had anybody leave before they came on,” Snyder said.

Clearly, he had never had Jennings as a guest before!

3. Oh, And He Also Walked Out Of The CMA Awards

Jennings didn’t reserve his protests for talk shows. In fact, 28 years before he walked out on Snyder, Jennings walked out of the CMA Awards for a similar reason.

As Jennings wrote in his autobiography, he was a scheduled performer at the 1970 CMA Awards, and was going to sing “Only Daddy That’ll Walk the Line.” But the show organizers were running short on time, and asked Jennings if he could cut his song to just a verse and a chorus.

Jennings responded in the way you’d expect him to:

“I said, ‘Why don’t I just dance across the stage and grin? Maybe do one line. That’ll give you a lot of time.’ They told me to not get smart. Either I did it or I got out.”

When the CMA folks told Jennings they didn’t need him to move on with the show, he decided to leave. Lesson learned, it was Jennings’ way or the highway.

4. The DEA Once Came Knocking

If you’re unfamiliar with this story, prepare yourself, because its a doozy.

To simplify, the DEA came after Jennings in 1977 after they discovered a package of cocaine that was being shipped to him. When his secretary brought the package to his recording studio, the DEA agents came knocking at his door.

After pointing out a mistake in the DEA agents’ warrant, Jennings and his drummer worked to hide all of the cocaine and pills they had. Jennings emptied vials from his pockets, while his drummer dropped a bag of cocaine down a crack in a wall and flushed another down the toilet.

Although there was no longer any evidence, the DEA ended up arresting Jennings anyway. All charges against him were eventually dropped, and Jennings wrote his song “Don’t You Think This Outlaw Bit’s Done Got Out of Hand” based on the event.

Want to hear the full story and all of its wild twists and turns? Then you’ll want to click right here.

5. He Sang A Duet With Big Bird

Alright, we know this doesn’t sound “insane” in the sense that the previous stories were, but hear us out.

When it comes to television, you don’t get much more iconic than Sesame Street. So when the show branched out into its first feature film, and Jennings was the only country singer cast, that was a huge deal.

Jennings had a small part in the film. He played an unnamed turkey farmer who picks up a hitchhiking Big Bird. As he drives with his new feathered friend, Jennings offers him some words of wisdom through an undeniably catchy song, “Ain’t No Road Too Long.”

The reason why this small role was such a crazy part of Jennings’ history is because he somehow managed to give a Sesame Street movie some outlaw cred. And it doesn’t hurt that he gave us the perfect road trip song in the process!

As you’ve now learned, Jennings didn’t like it when he didn’t get his way. In one instance, his refusal to give in to the folks negotiating his contract with RCA had an unexpected result.

Jennings wrote about the whole thing in his autobiography, saying he wanted a $25,000 sum from RCA, which they did not want to give him. When silence fell over the room, Jennings decided to get up and leave:

“I rose up, never said a word, walked out. I went to the bathroom to take a leak. When I came back, [Jennings’ lawyer] Neil [Reshen] greeted me in the hall. ‘You’re a f—–‘ genius,’ he said.”

Jennings was quite confused until Reshen explained things to him. When he walked out of his meeting, the RCA folks grew deeply concerned. Thinking he was mad, they surrendered and said they’d give him everything he asked for.

In other words, Jennings earned $25,000 just because he got up to go to the bathroom! Now that’s badass!

Which one of these insane, but true facts about Jennings did you find the most surprising or entertaining? He lived one eventful life, that’s fore sure.