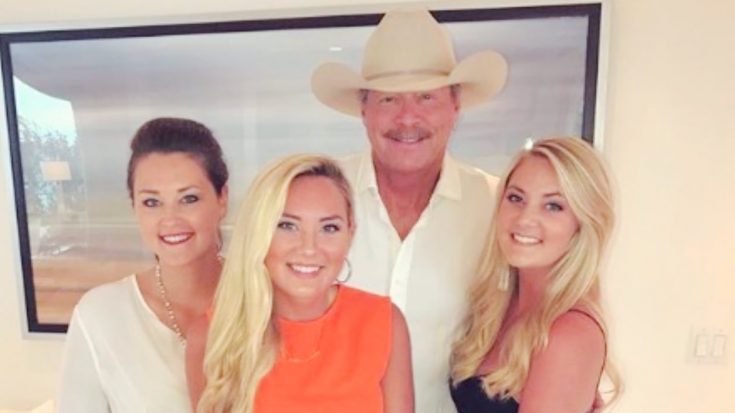 Alan Jackson and his wife, high school sweetheart Denise, were married for over ten years before they welcomed their first child into the world.

On June 19, 1990, Denise gave birth to a beautiful baby girl. They named her Mattie Denise Jackson, with her middle name honoring her mother.

The next seven years saw the addition of two more girls to the Jackson family. Daughter Alexandra Jane was born on August 23, 1993, affectionately known by her family as “Ali.” The Jackson’s  youngest child, daughter Dani Grace, was born on August 28, 1997,  just five days after Ali’s fourth birthday.

Get Ready To See How Much The Girls Have Grown

Over the years, fans had the chance to watch the Jackson girls grow as they popped up every now and then to support their father or appear at his performances. They even had starring roles in one of his music videos…the one that accompanied his sentimental song, “Drive.”

Now 29, 26, and 22, respectively, Mattie, Ali, and Dani are no longer the little girls who had a grand old time riding around with their father in the music video for “Drive.” They have grown into strong and beautiful women, and we have the photos to prove it.

If you haven’t seen Alan and Denise’s girls in some time, you may be surprised to see just how grown up they are now!

We’re throwing it way back with this first picture! That way, you can see just how much Alan and Denise’s daughters have grown in just a few short years.

This photo was taken during the 38th ACM Awards in 2002. Alan went home with the award for Video of the Year for “Drive,” and since his girls starred in the clip, it only made sense to bring them (and Denise!) as his dates. They all looked so pretty in their fancy dresses!

Fast forward eight years after they walked the red carpet at the ACM Awards, and Alan’s girls joined him yet again for another special event. This time he was being inducted on the Hollywood Walk of Fame.

Mattie was out of school by then, as she was approaching her 20th birthday. But her two younger sisters were still just teenagers…Ali was only 16 and Dani was 12! Still, even at those young ages, you could already tell that the Jackson girls were becoming beautiful young ladies.

The girls kept up their tradition of helping their dad celebrate his big accomplishments when they joined him for the unveiling of an exhibit in his honor at the Country Music Hall of Fame and Museum.

This photo was taken in 2014, just four years after his Hollywood Walk of Fame induction, and in that short time the girls grew up so much!

In June 2017, Alan shared this sweet photo with all three of his daughters to celebrate Father’s Day. “Best Fathers (sic) Day present is spending time with my beautiful girls,” he wrote.

A post shared by Southern Bride Magazine (@southernbridemagazine) on Jun 21, 2018 at 6:16am PDT

On October 7, 2017, Alan and Denise’s eldest daughter Mattie married the love of her life, Ben Selecman, during a gorgeous ceremony at the Jackson family estate in Tennessee.

Her wedding was featured by Southern Bride, and she appeared alongside her mother and father on the cover of the Summer-Fall issue released in 2018. She was a gorgeous bride!

#happyfathersday to all of the wonderful, hard-working, always-watching dads who know how to rock their favorite clothes era, forever. 😍 For this special day, we’ve shared a sneak peek from Mattie Selecman’s wedding, the beautiful daughter of @officialalanjackson! For more details, see our stories! ✨✨✨ Photographer: @kristynhogan Flowers: @thetuliptreeinc Gown: @verawanggang Mother of the Bride Gown: @cristinaottaviano Hair & makeup: @parlour3beauty Venue: the Jackson Family Estate

A post shared by Southern Bride Magazine (@southernbridemagazine) on Jun 17, 2018 at 6:37am PDT

Another beautiful photo Southern Bride shared from the wedding shows Mattie and her father sharing an affectionate moment with one another.

You can see the love they have for each other in their eyes!

The older I get the more, the more thankful I feel…” #HappyThanksgiving

Just a month after Mattie’s wedding, the entire family got together to honor Alan once again. This time, the whole bunch, including Ben, dressed up in their finest attire to celebrate Alan’s induction into the Country Music Hall of Fame.

Are you starting to notice a pattern here? Alan’s talents are too great to go unrecognized, which is why he was awarded another great honor in the summer of 2018.

That was the year he was inducted into the Songwriters Hall of Fame, and of course, Denise and the girls were on hand to celebrate the occasion.

Just a couple of girls who decided to go for it 💗 thanks for helping make this dream a reality for us!!! Remember we are going to start sending out surprise packages to those of you using our hashtag and tagging us when you are wearing your naSHEville gear! We are loving this incredible community that’s forming and we can’t wait to share with y’all all the events we have lined up! 🙌🏻 . . . #naSHEville #yintomyyang #nashville #sisterhood #nashvillegirls

No, that isn’t one of Mattie’s little sisters you see pictured with her above. That’s actually her friend and NaSHEville founder, Brooke Tometich. NaSHEville, according to its website, “is a brand, a body, and a movement celebrating fierce, grace-filled women of Nashville and calling them to share their stories and gifts with other SHE’S of our city.”

They devote their time and energy to a number of causes, including providing support for widows and helping orphans.

Mattie is a co-founder of NasSHEville, and sadly, her personal experience fuels her passion to help others through the organization.

When we started thinking about what we wanted to highlight in February- my heart instantly sank when I thought of all the widows. I can’t even fathom in the month that romance and love is constantly thrown in your face how hard that has to be for the ones who just had to face all the holidays without their soul mate. I have watched Mattie step into this heart shattering new identity as a young widow with so much faith, honesty and strength. You will be hearing a lot from her heart this month as she is navigating this new life. We want to make sure we spread awareness for these women and how a simple phone call, girls night out and constant prayers can help them make it through. Our official partner is @modernwidowsclub and as fate would have it, they were just beginning to launch their Nashville chapter as Mattie joined this club nobody ever foresees themselves joining. It is a group of women that can have community and strength in numbers founded by @carolyncaplemoor . Old, young, recent or past widows all coming together to not let their pain be in vain! 💗 Be on the lookout for Mattie’s beautiful blog post this week and for other ways you can help support these women! God knew how hard a life as an orphan or widow would be and I know that’s why He made sure to make Himself very clear that He calls us to take care of them! James 1:27 and Isaiah 1:17 🙌🏻 . . . #naSHEville #modernwidowsclub #nashvilleblogger #widow #nashville

As beautiful as Mattie may be on the outside, her true beauty shines in her strength. In September 2018, just one month away from her first wedding anniversary, she was forced to cope with the sudden loss of her husband, Ben.

The times surely haven’t been easy for Mattie, yet she, in the words of her own father, has turned her “great pain into a great purpose” to help others who have been through similar experiences.

My daughter Mattie has a new mission and venture that gives back to women and orphans in need. Go check out @nasheville_ and support strong women like her, turning their great pain into a great purpose. #ProudDaddy #ProudOfAllMyGirls #NaSHEville

In November 2018, Mattie joined her mother and sisters at an event showcasing NaSHEville. All three Jackson girls showed their support by wearing t-shirts with the NaSHEville logo, while Denise donned a blouse in the organization’s signature bright pink shade.

Alan gushed about his beautiful girls by sharing the photo on social media, and encouraged all of his followers to check out NaSHEville to support women like his daughter Mattie.

In closing, Alan included a hashtag reading “#ProudOfAllMyGirls.” We think that’s the most beautiful thing of all about Mattie, Ali, and Dani. They have grown into incredible young women who make their parents proud every day.

We, as fans, should be grateful that Alan and Denise have given us the chance to watch their girls’ journeys to where they are today. Because we too, are so proud of the women they have become.