Young Elvis Sings “Peace In The Valley” In 1957 Clip 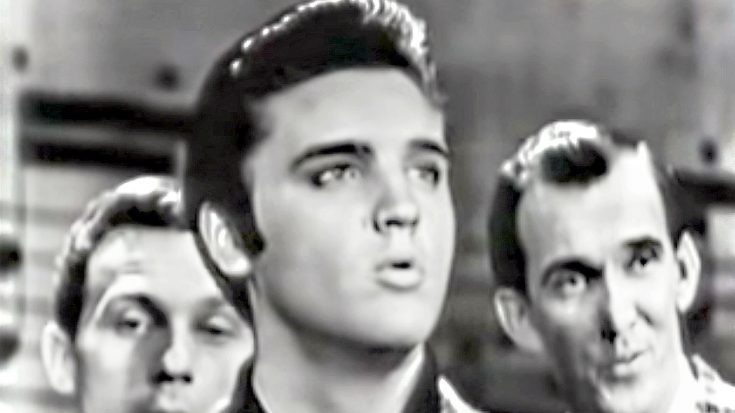 Let’s take it back to 1957 when one young, future legend was taking over the music industry one song at a time. Girls everywhere were falling head over heels in love with the charming young man that was Elvis Presley. From his hip-shakin’ dance moves to his golden vocals, there wasn’t a single thing fans didn’t love about the swoon-worthy singer.

The “Speer shoot” is considered to be the very first proper ‘official’ photo shoot Elvis ever did, with Vernon and…

Presley recorded the gospel song, “Peace In The Valley” in January of 1957. Accompanied by the Jordanaires quartet, he gave fans a different side of Presley they hadn’t yet seen. The Jordanaires were a gospel vocal quartet that often provided background vocals for Presley during live appearances and recordings. The group was featured on several of Presley’s hits up until 1972 including “Heartbreak Hotel.”

Elvis Presley with the Jordanaires

During a live performance on the Ed Sullivan Show, Presley stunned with the gospel tune. Before he even sang his first note, crazed fans were screaming. As Presley stood on stage with the Jordanaires quartet he began to serenade the crowd with his rendition of “Peace In The Valley.” As the five talents stood together upon the stage, their harmonies came together perfectly. Presley – who looked handsome as ever – wore a patterned suit with his slicked back brunette locks.

After its late 1950s success, it became a country favorite. Not long after, country artists across the board began recording their own renditions of the hit. George Jones, Loretta Lynn, Johnny Cash, and Dolly Parton are just a few of the big names that make that list.

Although no one can do it quite like Elvis does!

Watch Elvis’ riveting performance of “Peace In The Valley” below.