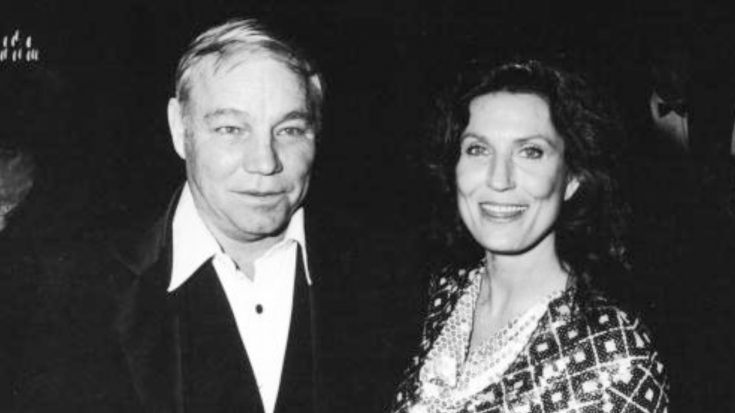 Loretta Lynn was still just a teenager when she married Oliver “Doo” Lynn on January 10, 1948. The couple left their home state of Kentcuky while Loretta was pregnant with their first child and traveled to the logging community of Custer, Washington.

There the couple settled down, and their family quickly grew. Their first four children, two daughters and two sons, were born over the course of only six years.

The year before the Lynns welcomed their son Ernest, Doo bought Loretta her first-ever guitar, a $17 Harmony. She taught herself how to play it, and Doo served as a constant source of encouragement.

It was Doo who got Loretta to start her own country band, and it was Doo who also helped her push her debut single, “I’m a Honky Tonk Girl.” Fans got the chance to see how these early years of Loretta’s marriage and career played out in the 1980 biographical film, Coal Miner’s Daughter.

Being in this part of South Carolina reminds me of Michael Apted’s 1980 film “Coal Miner’s Daughter”, starring the always magnificent Sissy Spacek as country singer Loretta Lynn & Tommy Lee Jones, giving his best performance as her husband. He should have won an Oscar for this. pic.twitter.com/alvgkzkk79

Far From A Fairytale Romance

As Loretta’s career took off and her fame increased, Doo remained her champion. They eventually welcomed two more children together, twin girls named Peggy and Patsy.

But things weren’t always bright between the couple. Loretta wrote of their hardships, which centered around Doo’s drinking and womanizing, in a number of her hit songs, such as “Don’t Come Home A Drinkin'” and “Fist City.”

Loretta wrote about their troubles in her 2002 autobiography, Still Woman Enough. In the book, she said there was something that made her stick to Doo, no mater how many times he had wronged her.

“That belief would be hard to shove out the door. Doo was my security, my safety net. And just remember, I’m explainin’, not excusin’… Doo was a good man and a hard worker. But he was an alcoholic, and it affected our marriage all the way through.”

Despite all of the tough times, the couple made it work. They had been married for nearly 50 years before Doo passed away in 1996 at the age of 69.

January 10, 2019 would have been the couples’ 71st anniversary. Wanting to mark the occasion, the team behind Loretta’s ranch and campground in Hurricane Mills, Tennessee, shared a special video to the ranch’s Facebook page.

The video shows Loretta performing a song titled “I Can’t Hear the Music,” which she wrote in Doo’s honor after he passed away.

“This song is one of the most heartfelt songs she has ever written and performed,” read the post on the ranch’s page. “So much so in fact that she only ever performed it live once as she was always overcome with emotion while singing it.”

Loretta later went on to pen a note of her own in remembrance of Doo on their anniversary date. Though her message was short, it was sweet and emotional. Emotional enough that it may even bring a few tears to your eyes.

In the note, Loretta made it clear that although she and Doo “fought hard” they also “loved hard.” Her admiration for her husband of nearly half a century is still as strong as it ever was, as she wrote, “I still miss him!”

While they had their trials and troubles, Loretta and Doo’s love story is still one of country music’s greatest.

“I Can’t Hear The Music” was the song that Loretta wrote for Doo after he passed, but there was another song that she sang to him right before he left this world. That song was “Wouldn’t It Be Great,” which she recently re-released as the title track of her latest album. You can give that a listen below.

We’re sure that Loretta still misses Doo terribly. She clearly loved him dearly, and still does.