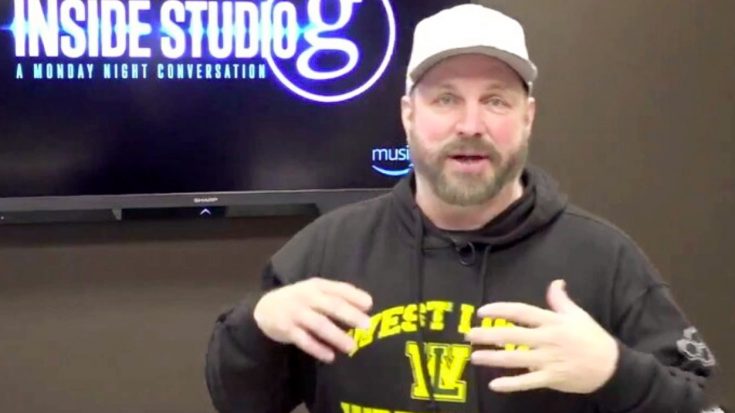 Garth Brooks Has Been Busy

For months, Garth Brooks has been hard at work planning two major projects. The first being his three-year Stadium Tour, which kicks off on March 9 at The Dome At America’s Center in St. Louis, Missouri.

Other announced stops for 2019 include Glendale, Arizona, Gainesville, Florida, and Pittsburgh, Pennsylvania. As of press time, all of the stadium shows are already sold out, except the one in Pittsburgh.

The stadium trek serves as the followup to Brooks’ record-shattering World Tour, which lasted for over three years. After nearly a year off of the road, Brooks announced the new tour news at the Ryman in October, and fans went nuts.

The second project Brooks has been working on has fans just as excited. You can probably guess what it is…a new album!

For months, Brooks has been telling fans on his weekly Inside Studio G Facebook Live sessions that he has a new record in the works. He gave us a first taste of that record when he released a new single, “All Day Long,” in June.

The single was followed by a second, titled “Stronger Than Me.” Brooks debuted the track at the CMA Awards in November, where he delivered an emotional performance dedicated to his wife and fellow country superstar Trisha Yearwood.

For some time now, those two songs have been the only real source of information fans had to hold on to concerning Brooks’ new project. An album title still wasn’t revealed by Christmas, well over a month after “Stronger Than Me” had been released.

At Last, The Reveal…

Well at last, the wait is over, because Brooks just unveiled the title of his new record during his latest Inside Studio G session. And if the title gives us any indication of what the record is like, it’s going to be a good one.

The title of the NEW album is… love, g #StudioG *To watch tonight’s #StudioG click link in bio or go to Facebook.com/GarthBrooks *

This won’t be the first time that Brooks has singled out one word as an album title. Just a couple famous examples include Sevens and his latest release, 2016’s Gunslinger.

What Do Fans Think?

Brooks went on to explain his rationale behind the seemingly simple album title, saying, “It’s just been a fun thing to go through, a fun process to go through, especially being off from touring where you don’t have to worry about if your voice is gonna be able to go in for sessions or not.”

Fans were thrilled over the announcement, with many adopting the album title in hashtags to showcase their excitement.

Going to be so #FUN can’t wait

Looking forward to all the #FUN Thanks for all you do for us fans.

As if dropping the album title wasn’t enough, Brooks also gave an estimated release time for it. He said that he planned to record his last cuts this week, and after that, all of the recording would be done.

If all goes according to plan, Brooks said that fans should expect the release of Fun to be some time this spring. That’s sooner than we ever expected!

You can listen to Brooks chat more about the new album during his Inside Studio G session below. Start the clip at the 6:13 mark if you’d like to skip straight to the album chatter.

What do y’all think about the title of Brooks’ upcoming release? We’d love to hear your thoughts!

The title of the NEW album is… love, g #StudioG