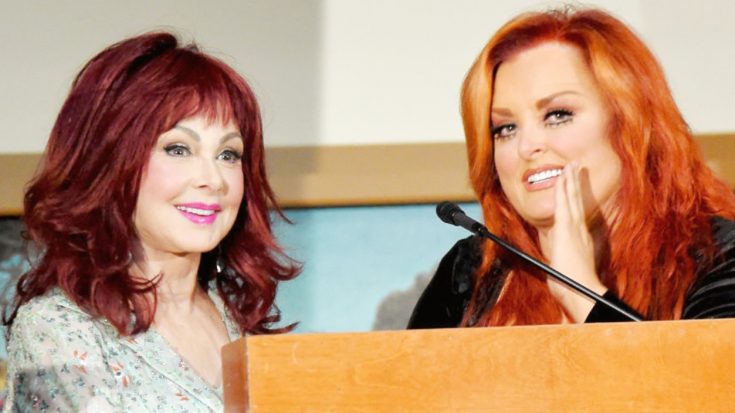 A Mother & Daughter Make It In Country Music

Diana Judd was only 18 years old when she gave birth to her first child, a daughter she named Christina.

But who in the world is Diana and Christina, you ask? Well, they would go on to be known as Naomi and Wynonna, and would form one of country music’s most iconic duos, The Judds.

Together, Naomi and Wynonna scored one hit song after the next. Their first number one hit was actually their second single, titled “Mama He’s Crazy.”

Released in 1984, the song made history when it topped the country chart. It marked only the second time that a female duo had landed a number one country hit. The first to ever accomplish the feat was The Davis Sisters with Skeeter Davis in 1953.

Every song The Judds released from “Mama He’s Crazy” until the end of 1986 also ended up claiming the chart’s top spot. The run was interrupted by “Don’t Be Cruel,” which only climbed as high as the tenth position.

Numerous other chart-toppers followed after that, including “I Know Where I’m Going” and “Young Love (Strong Love).”

But behind the scenes, things between the mother and daughter duo weren’t going as smooth. The two always had a riff in their relationship, and their spats were often the subject of sensational gossip.

Eventually, the two ended their run as a duo in 1991 and Wynonna went on to have a successful career as a solo artist. But even though they were no longer working together on a regular basis, mother and daughter still had their fair share of squabbles.

Despite all of their trials, love has always won in Naomi and Wynnona’s relationship. The two recently reunited at the Country Music Hall of Fame and Museum in August 2018 to mark the opening of their exhibit in the museum.

Titled The Judds: Dream Chasers, the exhibit showcases memorabilia from their lives and careers, giving visitors a glance into their personal history.

#Throwback to the VIP opening of the exhibit "The Judds: Dream Chasers". Plan your visit to the Museum to see this exhibit that tells the story of @TheNaomiJudd and @Wynonna's journey to stardom. pic.twitter.com/QBvzfo3KFM

Throwing It Back With A Photo

In celebration of her mother’s birthday on January 11, Wynonna unearthed another piece of that personal history to share with her followers on social media. She uncovered a decades-old photo of herself and her mom, and thought her birthday was the perfect opportunity to share it.

The throwback photo shows Naomi holding a toddler-aged Wynonna on her lap. Both mother and daughter flashed bright smiles at the camera, resulting in a priceless snapshot.

“I’m so glad my Mama was born!!!!” Wynonna wrote to accompany the happy photo. “I wouldn’t be here without her!!”

I’m so glad my Mama was born!!!! I wouldn’t be here without her!! HAPPY BIRTHDAY, @thenaomijudd! ❤️🎶🎉

If you’d like to take an even deeper look into the Judds’ history, then follow along below as they tour their new Country Music Hall of Fame exhibit with Kellie Pickler and Ben Aaron of Pickler & Ben. There are so many interesting things to discover in the showcase!