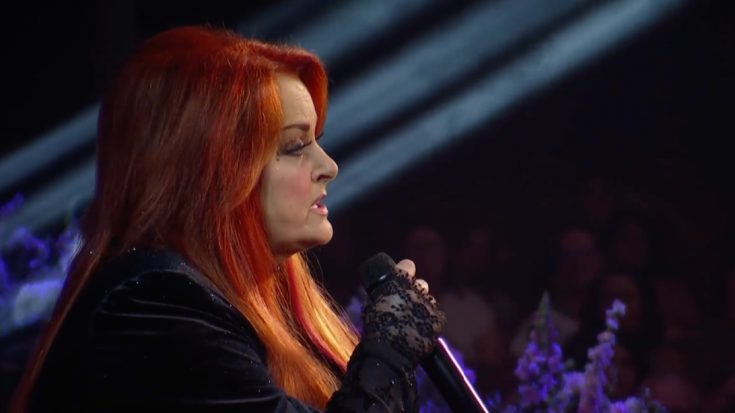 Wynonna Judd is days away from kicking off what was supposed to be the final tour for The Judds. But, after her mom Naomi’s death in April, Wynonna will be taking the stage without her.

In her first television interview since Naomi Judd died, Wynonna opened up about her relationship with the woman who shared the stage with her for more than 8 years.

“There’s nothing like family harmony. And sometimes the only harmony we had was in music,” Wynonna said of her mom in a new interview with CBS Sunday Morning.

Wynonna and Naomi often spoke about their rocky relationship in interviews, their honesty and realness making them relatable to mothers and daughters everywhere. Though things changed when Naomi retired from The Judds following a Hepatitis C diagnosis in 1991, the pair still fought to maintain a their closeness.

“We were incredibly close then she’d get mad at me….then we’d not get along and be disconnected. Then we’d come back together and hug and cry. It was incredibly complicated,” the singer shared. “We tried really hard. And those are the tears because I know that we tried.”

So how does Wynonna feel about her mom’s death? She’s angry.

“Incredibly angry,” Wynonna said, adding that the feeling doesn’t go away. But, she says she feels her mom “nudging” her, a feeling that sometimes makes her laugh, and other times makes her say, “I really miss you. Why aren’t you here so we can argue.”

The 58-year-old singer added that the good memories are coming to the forefront of her mind more and more as time passes. “I think when you lose your mother a lot of that crap goes away because it doesn’t matter any more.”

The Judds: The Final Tour was announced just weeks before Naomi took her own life. In honor of her mom, Wynonna chose to embark on the tour alone, a move that she hopes will be therapeutic for her.

“I think it’s important to do it,” Wynonna said. “I feel like I have my marching orders.”

The singer fought back tears as she thought about what it will be like to be on tour without Naomi. “As I walk out on stage that first night, I’ll probably say something like, ‘It’s not supposed to be like this.’ Because it’s not, right? It’s supposed to be the two of us. And I’m gonna be angry because she’s not there.”

Despite their differences, Wynonna and Naomi shared a bond that most mothers and daughters will never understand.

Not only did Naomi and Wynonna survive failed marriages, financial hardships and more than their share of hard knocks, the pair shared the honor of being one of the most successful duos in country music history. Between 1983 and 1991, The Judds released six albums, charted 14 No. 1 hits, earned five Grammy Awards, and sold more than 20 million albums.

The duo performed together on stage for the last time at the CMT Music Awards two weeks before Naomi died. They sang their 1990 hit song “Love Can Build A Bridge,” marking their first televised appearance together in 20 years.

Watch Naomi and Wynonna’s final performance in the video below.