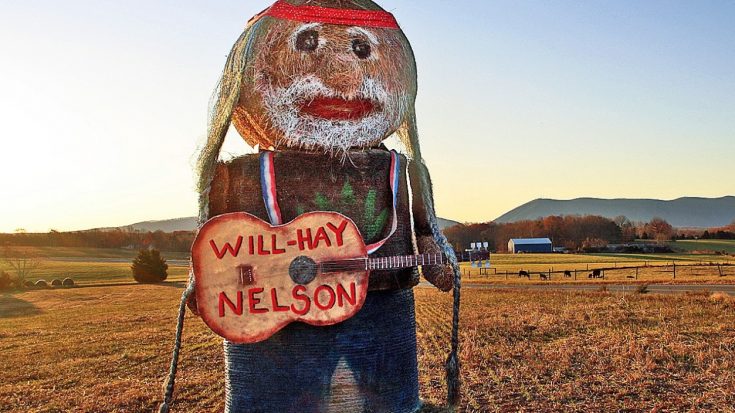 In Huddleston, Virginia a woman named Beth Bays has built one of the coolest things ever, a 15-foot tall sculpture of Willie Nelson made entirely out of hay bales.

Every year a nearby farm displays a sculpture made out of hay bales. This year they created Will-Hay Nelson and it’s great.

She’s been building sculptures likes these for the past 8 years and it all started when her community had a hay bale decorating contest. There weren’t many people entering the contest and someone asked her to enter so she entered and has been doing it ever since.

Beth has made an elephant, a cow, a bird, Christmas characters and the Wizard of Oz characters. The contest stopped a few years back but because she’s so good at it and everyone loves her hay sculptures she continues to do them.

When it comes to “Will-Hay Nelson” though she says, “This one seems to be everyone’s favorite by far. My cousin joked that I might have to quit now because I’ll never be able to top this,” she told Richmond.com.

Her friends help her out with building them and they use a John Deere tractor to stack them on top of one another. She says it’s like stacking legos and that’s the easy part. The hard part is doing all the detail work and thinking of what kind of sculpture she wants to build each year.

Beth said that she made the arms and nose out of chicken wire and for the guitar, she used a big piece of styrofoam that was in her barn. People from all around the town come to take pictures with it and people honk their horns as they drive past it. Some people who stop by when she’s not their even leave thank you notes pinned to the hay bale.

They even created a funny music video with Will-Hay Nelson in it you can watch below.