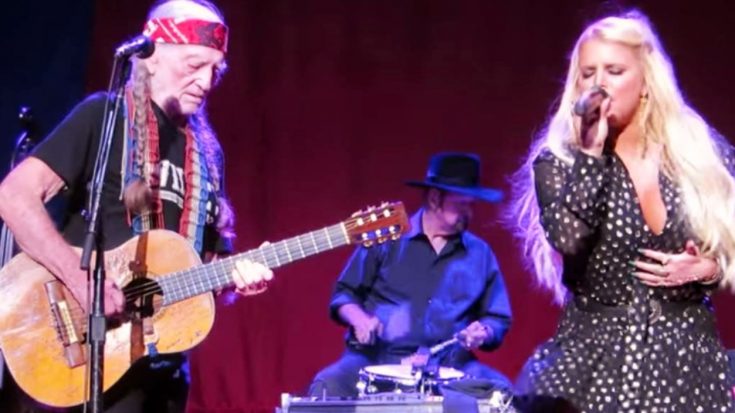 Throughout his decades-long career, Willie Nelson has performed duets with too many artists to count. He hasn’t kept his duet partners strictly country either.

In turn, Nelson has earned the respect of artists from all genres of music. One such artist is Jessica Simpson, who started off her career as a pop artist in 1999 before crossing over to country in 2008 with the release of her album Do You Know.

Simpson had dabbled in country music prior to that album’s release, most notably by recording a remake of “These Boots Are Made for Walkin'” to coincide with her playing Daisy Duke in the 2005 The Dukes of Hazzard film.

Wanting to further introduce herself to the country music community, Simpson decided to make another big move. Her move involved appearing in a music video for an artist she and the country music world admired.

That artist was none other than Nelson, who featured Simpson in his video for his 2008 song “You Don’t Think I’m Funny Anymore.”

The two have remained close friends ever since, even though Simpson has not been active as a singer since releasing her 2010 Christmas album. She finally stepped back on stage for the first time in years in August 2018, and fittingly, Nelson was by her side.

Nelson was performing at the Orange County Fair when he told everyone he was going to welcome his “good buddy Jessica Simpson” out on stage to sing with him. When contacted by People, a rep for Nelson had no information on the song they performed, which is unrecognizable.

The moment was a special one for Simpson. Not only was it her first venture back into singing after many years away, but it was the first time her husband and her children, six-year-old daughter Maxwell and five-year-old son Ace, had ever seen her perform:

“It’s not every night that a legend invites you to join him on his stage,” Simpson wrote on Instagram along with a photo from the performance. “And my husband and kids got to see me perform for the first time!“

It’s not every night that a legend invites you to join him on his stage. And my husband and kids got to see me perform for the first time! I love you @willienelsonofficial ? ? @kristingram

Now you can watch Simpson’s grand return to country music by checking out the video of her duet with Nelson below.

Simpson eventually released the song she and Nelson sang that day. Titled “Your Fool,” the song was released along with Simpson’s audiobook in 2020.