Why Jerry Lee Lewis Set His Piano On Fire Mid-Concert 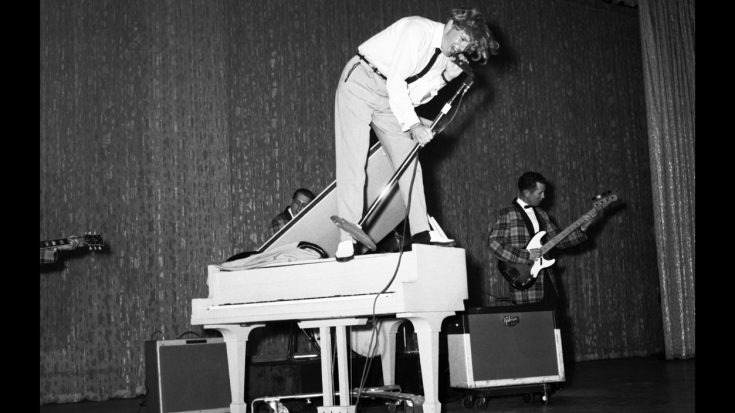 One of the baddest boys to ever strike the stage in rockabilly and country music has a wild story that not many can match – or even top!

Jerry Lee Lewis is a huge name in music of all genres and has chartered a career lasting more than 65 years, filled to the brim with a seemingly endless number of chart-topping hits. Throughout his career, he’s found his name in headlines more than a few times, but none more jaw-dropping than when he set fire to a piano mid-concert…

Known as a pioneer of rock and roll and rockabilly music, Lewis began his career with a storm of hits like “Crazy Arms,” “Whole Lotta Shakin’ Goin’ On,” and “Great Balls of Fire.”

Later on in his career, he transitioned to country music and found more success with songs like “Me and Bobby McGee,” “Another Place, Another Time,” and “To Make Love Sweeter For You.”

While Lewis has had incredible success in nearly every single genre he’s tried his hand at, it’s his unforgettable early years and hit song “Great Balls of Fire” that keep the coals warm on this once-in-a-lifetime performance.

Sometimes debated by historians, but unequivocally confirmed by Lewis in his biography, is the story of a night at the famous Paramount Theater in Brooklyn, New York, when an angsty Lewis set fire to the piano on stage in the middle of his concert!

As the story goes, Lewis was ticked off that fellow musician Chuck Berry was chosen to close the night’s show out due to quirky clauses in his contract. While Lewis was the more successful performer at the time, Berry got to finish out the night’s talent showcase simply due to a technicality.

Not having it, Lewis had a thought strike him and didn’t hesitate to act on it…

1958 Angry that Chuck Berry was selected to close the show, Jerry Lee Lewis sets his piano on fire during "Great Balls Of Fire" at Alan Freed's Big Beat Show at the Brooklyn Paramount. Also appearing: Buddy Holly, Frankie Lymon and The Chantels. pic.twitter.com/8lWDEr2GFA

Lewis took to the stage and sang some of his signature songs, including “A Whole Lotta Shakin’ Goin’ On” before taking it all to the next level.

The crowd was howling with excitement, police had to keep them at bay and stop them from climbing on stage. The thrill and adrenaline only fueled Lewis to keep going and he jumped right into “Great Balls of Fire.”

Just a verse in, he kicked the stool back from the piano, doused the open piano with some gasoline he had in a Coke bottle, and threw a match into the whole mess before continuing to sing his heart out.

Flames licking at the piano’s lid, Lewis finished his song to the insane roar of the audience and walked off stage before issuing one simple statement to Berry:

Watch the entire scene unfold in the video below from his 1989 biopic starring Dennis Quaid.