Where To Watch “Yellowstone” And Other Western TV Shows 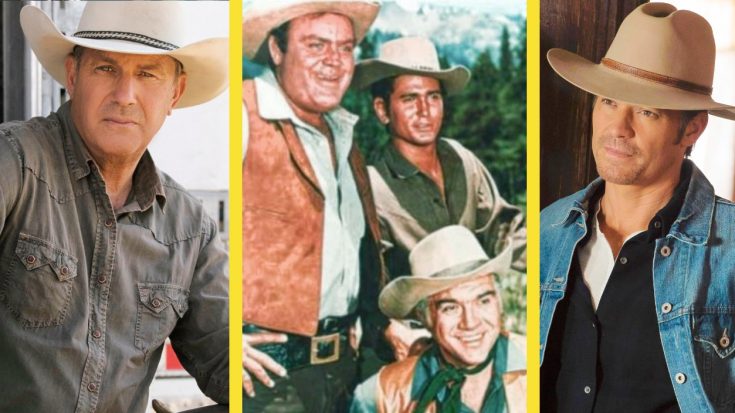 Usually, when you think of a Western, you think of period television shows and movies set in the old west. But thanks to some newer shows, modern Westerns have become more and more popular.

As fans of the genre, we put together a list for like-minded folks wondering where they can consume the best Western content.

Check out the list of where you can watch an array of Western television shows, both classic and modern.

The show follows John Dutton, played by Kevin Costner, as he and his adult children run and protect their six-generation ranch as many different groups of people try to take their land away from them.

You can sign up for Peacock and start streaming all three seasons of Yellowstone here.

In 2010, the Timothy Olyphant-led series Justified began its six-season run on FX. Olyphant plays Deputy U.S. Marshal Raylan Givens, who is something of a 19th-century-style, Old West lawman living in modern times. In response to his controversial but “justified” quick-draw shooting of mob hitman Tommy Bucks in Miami, Givens is reassigned to Lexington, Kentucky.

You can watch all six seasons on Hulu here.

Gunsmoke originated as a radio show in 1952 and ran until 1961, but was made into a television series in 1955. The show ran until 1975, making it the longest running Western television series with 635 episodes. The first 12 seasons aired on Saturdays at 10 pm, while Seasons 13-16 aired Mondays at 7:30pm. The last four seasons aired Mondays at 8pm.

Gunsmoke was among the top-20 television programs for its entire 20-year run…impressive!

The first 2 seasons are available on CBS here or you can purchase DVDs on Amazon here.

Longmire is set around Walt Longmire, a sheriff in a small town in Wyoming. The show premiered on A&E in 2012, but was cancelled in 2014 after three seasons despite being the “highest-rated original drama series.” Netflix picked it up for seasons four, five, and six.

You can watch all six seasons of Longmire here.

Chuck Norris starred as the titular character, Cordell Walker, a former Marine and modern-day Texas Ranger who believes in the Code of the Old West. The show ran on CBS from 1993-2001.

Unfortunately, Walker, Texas Ranger isn’t available to stream anywhere yet, but you can purchase the series on DVD here.

In 2016, HBO premiered the television series, which followed a 1973 film of the same name, its sequel Futureworld, and short-lived series Beyond Westworld.

The show is centered around Westworld, a technologically advanced Wild West theme park, which is filled with android “hosts.” Guests pay to indulge their fantasies, like Old West shootouts, without the fear of being hurt, as the “hosts” cannot harm humans. Westworld has aired three seasons so far and in April 2020, it was picked up for a fourth.

Westworld can be streamed on HBO Max here.

Which shows are you going to binge watch first?