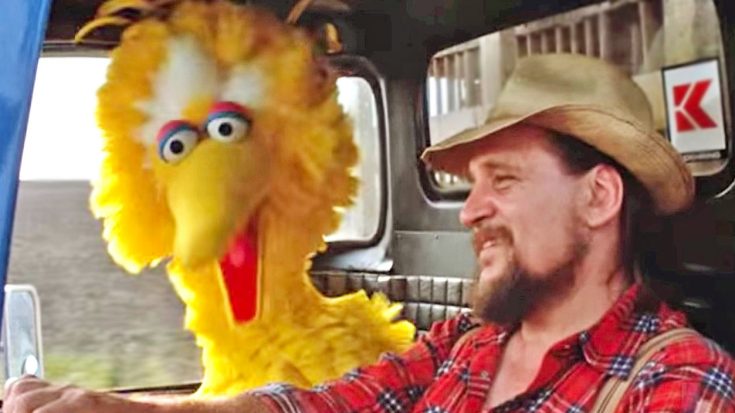 Since Waylon Jennings was so well-known as a singer and pioneer of the outlaw country movement, few people recall that he had a whole separate side to his career. That side involved work in films and television as a narrator, actor, and much more.

Jennings’ most famous role as an actor was undoubtedly that of the Balladeer in The Dukes of Hazzard television series. He sang the show’s theme and served as its narrator from its first episode (1979) to its last (1985). Jennings only showed his face on the series one time, which was when he played himself in the seventh season episode appropriately titled Welcome, Waylon Jennings.

After gaining so much recognition as the Balladeer in The Dukes of Hazzard, Jennings explored the acting world a bit more. In 1985, he took on a seemingly unexpected role for an outlaw legend such as himself. You probably won’t believe this, but Jennings acted in a children’s movie!

That movie was none other than the first-ever Sesame Street feature film, which was titled Sesame Street Presents: Follow That Bird. The movie focuses on the beloved Big Bird character as he goes on a wild adventure to try and find his way back home after being separated from his friends.

As Big Bird makes his great escape, he manages to hitch a ride from a wise turkey farmer. You probably guessed it by now, but that turkey farmer was played by Jennings, who was the only country singer to appear in the film.

When Big Bird first approached the turkey farmer to ask for a ride, he was hesitant, saying he only drives turkeys. But when Big Bird told him that Oscar the Grouch calls him a big turkey, the farmer gave in and agreed to give him a lift.

The best interaction between Big Bird and Jennings’ character occurs once they hop in an old truck together and start cruising down the road. When Big Bird learns how far away Sesame Street is, he exclaims that he’ll never be able to make it home. But Jennings fires back with a solid piece of advice, telling him, “pick up your feet, and follow your beak.”

After that, Jennings bursts into the song “Ain’t No Road Too Long,” which was one of only a few songs featured on the film’s soundtrack. Jennings dishes out some more encouraging words to Big Bird through the song, as he sings, “Once you set your heart to movin’ on, son, there ain’t no road too long.”

Some of the other Sesame Street characters join in singing the song as they search for Big Bird in other areas of the country. But the whole thing circles back to him and Jennings at the end, and the two take turns singing to close out the song.

We bet you never thought that you’d watch a duet between Jennings and Big Bird, but here it is! By now you know that this is something you absolutely can’t miss out on seeing. One, because it shows off Jennings’ hidden talent as an actor, and two, because it’s just downright entertaining!