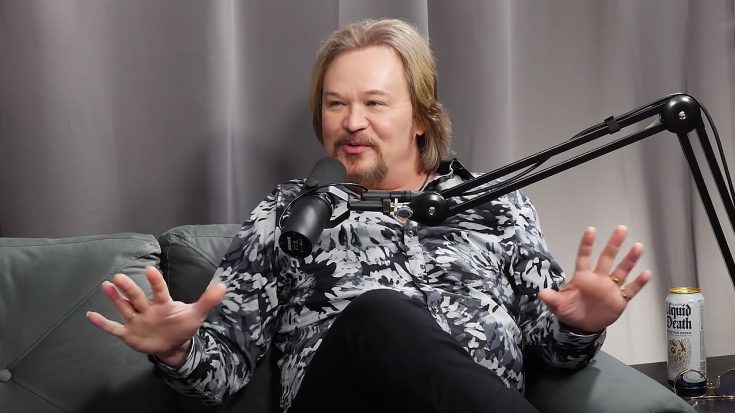 With the release of Travis Tritt’s new album, Smoke in a Bar, Theo Von decided to post an interview he had with the country legend on his show, This Past Weekend.

The two of them chatted about various topics including Merle Haggard stories, quarters being hurled at Tritt while on stage, their first kisses, and of course Tritt’s new music.

During the interview, Tritt told a never-heard-before story about the first time he met Waylon Jennings. Tritt described how being labeled as an outlaw in country music was something that bothered him originally. It started to discourage and weigh him down until Jennings gave him some words of advice.

“He sat me down in his dressing room that first time we ever met and he said, ‘Listen, Hoss, I’ve been hearing all the stuff they’ve been saying about you in Nashville and these radio stations. Let me just remind you that everything they are saying about you now, is exactly what they said about me, and about Willie Nelson and Johnny Cash and Hank Williams Jr. and David Allan Coe.”

Tritt continued the story by saying Jennings asked if he was still selling records and drawing people out to shows. Tritt answered “Yes,” and Jennings replied,

“These people that come out, those are the people who work hard, 40, 50, 60 hours a week to put food on the table. And they’re willing to spend a certain amount of that hard-earned money to buy your music… and occasionally they splurge on a concert ticket. Those are the only people who matter and as long as you’re pleasing them, which you obviously are, to hell with all the rest of these people.”

With a staggering eleven studio albums some of Tritt’s biggest hits are, “Help Me Hold On,” “Anymore,” “Can I Trust You with My Heart,” “Foolish Pride,” “Best of Intentions,” “I’m Gonna Be Somebody,” “Modern Day Bonnie and Clyde,” “Here’s A Quarter,” “It’s A Great Day To Be Alive,” and many more. We’re glad he listened to the advice of Waylon Jennings!

Watch the entire interview in the video below.