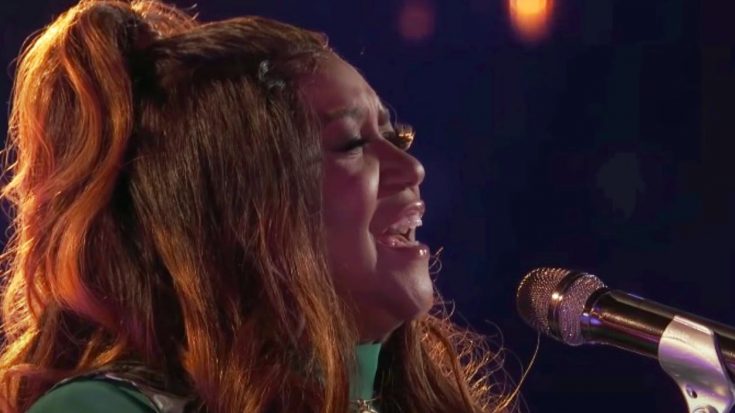 The show must go on!

After the performance, Moten turned to walk away when she tripped over a speaker on the stage. She fell, and some stagehands, her teammates, and her coach rushed over to check on her.

@NBCTheVoice contestant Wendy Moten is a lil bruised but OK, she says, after a stage mishap at the end of a group performance tonight during the Live Top 11 elimination show. Moten appears to trip over a speaker on stage. #TeamBlake #TheVoice pic.twitter.com/phdDNtbHvd

Host Carson Daly brought the show to a halt, saying:

“Everybody alright? Take a quick second. We just had somebody fall. We okay? Give us just one second, everybody, to make sure we’re okay…clearing the stage. We have some people coming to help now. An unfortunate event for Wendy Moten. She’s walking off. We hope she’s okay.”

Moten later appeared on the show to learn she had been saved and was a member of the Top 10. She briefly spoke to viewers about her fall, and said she was doing alright.

After the show, Shelton posted a video on Twitter to share an update on Moten. “Wendy’s okay. Don’t worry anybody. She hurt her elbow a little bit. I think she’s gonna be fine,” he said.

Thank you America 3 for 3! Proud of you Lana, @ParisWinningham, and is there anything that can stop @WendyMoten? The answer is no! #TeamBlake #TheVoice pic.twitter.com/cjHFWlJQJ3

Despite Shelton’s reassuring message, Moten’s fans were concerned about her future on the show after suffering such a nasty fall. But she proved she wasn’t going to let it stop her!

Moten returned to The Voice on Monday (November 29). Viewers were shocked to see the singer was wearing casts on both of her arms.

It turns out that Moten broke her right elbow and fractured her left wrist after falling on stage. She had to go to the hospital to receive treatment.

But Moten didn’t let her injuries stop her. She decorated her casts with sparkly sleeves and delivered a powerful version of Dolly Parton‘s classic song, “Jolene.”

“I’ve never seen a better example of strength and perseverance and fearlessness,” Shelton said at the end of Moten’s performance.

Her “Jolene” cover also earned a lot of praise from Kelly Clarkson, who said, “Kudos to you for even being on this stage right now and getting this done!”

Tune in to the video below to watch Moten’s remarkable cover of “Jolene.” We’re so happy to see her back on The Voice and will be praying for her complete recovery.