See Fan Reactions To George Strait Being Mentioned On “Yellowstone” 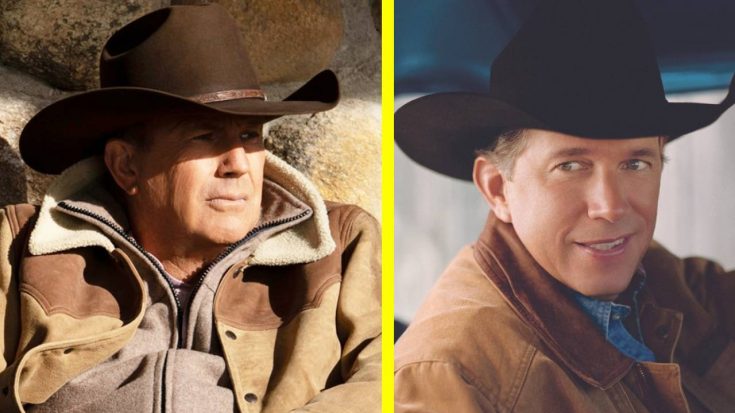 Season 4, Episode 5 of Yellowstone aired on on Sunday, November 28.

This episode started with John Dutton alone in his big house for one of the very first times after Kayce and his family left for the reservoir. Don’t fret, fans. Beth came to give him some company, as well as a good conversation along with the quote, “Worry not, Daddy. Only the good die young. If a meteor strikes Earth tonight, it is me and the cockroaches running this motherf—ker tomorrow.”

Later, she tells John she will be taking the job with Market Equities, the same company trying to buy John’s land. She informs him this will help them when she runs the company into the ground. She also drives 8 hours to tell her old boss at Schwartz & Meyer that she is the new president of Market Equities Montana division and that he is fired.

Later, we see Tate and Thomas Rainwater emerging from a sweat lodge. They are trying to help him after he had to shoot one of the men who was hired to kill the Dutton family. Rainwater assured Monica that after a few more sweats, and Mo taking him up to the hill, he won’t think of himself as a killer anymore.

A protest near Kayce’s office took place and after having rocks thrown at him, Kayce tackled the person, newcomer Piper Perabo who plays activist Summer Higgins, and causes mayhem forcing John to be called down to help out. He and Summer exchange words about why she is protesting cattle ranches and explains to her that the farmers who grow the “quinoa or whatever else” she eats, is killing lots of animals under the dirt, asking her, “How cute does an animal have to be before you care if it dies to feed ya?”

At the ranch, Rip is riding Lloyd hard for starting a fight in the bunkhouse, even making him teach “the boy” how to saddle a horse. When the cowboys have to break horses, he waits until they are almost all done to finally give Lloyd 3 horses to break on his own. John sees how Rip is treating Lloyd and says, “Remember who he is to us,“ to which Rip replies, “Sir, who he is to us is the reason he is still walking.”

Lloyd’s frustrations carry on through the entirety of the episode and ends with him seeing barrel racer Laramie, his former paramour, and Walker, his recent fighting partner, getting it on near the barn.

Elsewhere, Jamie Dutton meets with Riggins, the inmate who orchestrated the attacks on the Dutton family. He point blank asks him if Garrett Randall, Jamie’s biological father, paid him to do it. We don’t see his verbal answer, but all signs point to “yes.” Jamie goes to his new house he purchased to confront Garrett, but Garrett has a surprise for his son as well. Christina, Jamie’s old campaign manager who he had a relationship with, appeared with a baby in her arms.

“You did everything you said you would do,” she said to him. “Now I keep my word. Meet your son.”

Because of this shocking appearance, Jamie never got the chance to confront Garrett about the attacks. But we’re sure we will see it at some point this season!

At 6666, which is called “The Four Sixes” ranch in Texas where Jimmy was more or less shipped, he meets an old-timer who gives him many words of wisdom. He says that the “most glorious work you can do that nobody ever sees. It’s art without an audience till the day you die.”

That old timer is named Ross and at one point is talking to a legend when Jimmy wakes up. When a ranch hand told Jimmy it was time to work, he told Jimmy, “There’s three gods in Texas: the Almighty hisself, Buster Welch and George Strait. You just met one of ’em.” Without hesitation, Jimmy said that the old-old fella wasn’t George Strait.

I grew up showing horses in #4-H. At 15, I rode my first cutting horse & learned all about #BusterWelch. I also drove across TX to OK to watch my friend compete in reigning at the World Quarter Horse Show and listened to #GeorgeStrait the entire way! Oh how I love @Yellowstone ! pic.twitter.com/EwDKc2t8OR

In a hilariously round about way, the ranch hand called him stupid and they went off to break colts two pastures away, and those pastures were each 10,000 acres. Seems like a lot of riding and work for a guy who is supposed to be in a back brace.

Ross is played by the legendary Barry Corbin, who has over 220 credits to his name including playing Uncle Bob in 1980’s Urban Cowboy opposite John Travolta’s Bud. Uncle Bob and Bud have a close relationship and work together at the oil refinery plant, Bud also lives with Bob and his family. Bob also encourages Bud to swallow his pride and make up with his estranged wife, Sissy.

Jimmy just got to Texas, and he's already getting schooled. #YellowstoneTV pic.twitter.com/v6EsMi1TeJ

Buster Welch is an actual Texas cowboy legend, played by himself.

Fans couldn’t help but love the line the ranch hand said, mostly because they truly agreed that George Strait was a god in Texas! See some reactions below.

@Yellowstone brought in Barry Corbin, Buster Welch, AND mentioned George Strait in a single episode… Beyond obsessed. If they can get King George in an episode I might just have a stroke 😂 https://t.co/BBtgfARK8P

Been saying since the beginning of @Yellowstone the only thing missing is @GeorgeStrait. He would fit right in😍 So excited to at least hear King George mentioned tonight.

@willcain @SeanUnfiltered George Strait just got the greatest shout out on Yellowstone that has ever been in a show or movie! Three Gods in Texas