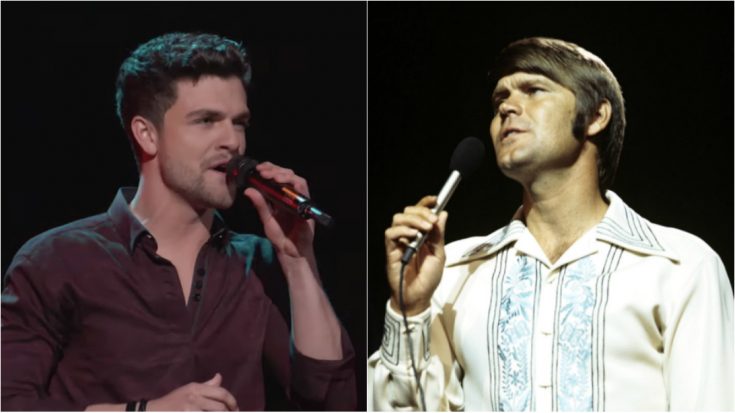 Season 17 of The Voice was apparent from the beginning that it had the deepest talent pool the show has ever seen.

After night two of the season premiere, we may have already found our favorite country singer. Let’s just say that it’s going to be tough for a country act to follow Cory Jackson’s Blind Audition. The Arkansas native channeled his fellow Arkansas Glen Campbell with a performance of Campbell’s 1969 chart-topping hit “Galveston.”

As soon as Jackson began to sing, the judges were drawn in by his rich country voice. Kelly Clarkson commented that he sounded “old,” something Jackson called “the best compliment ever.” It was no surprise that veteran coach Blake Shelton was the first to turn his chair. Kelly Clarkson and Gwen Stefani followed suit shortly thereafter.

When it was time for the coaches to try to woo Jackson to their team, a debate ensued over whether or not “Galveston” was indeed country. The debate started when Gwen Stefani told her boyfriend, Blake, that she was shocked to see him turn his chair for such a “theatrical” performance.  Blake then informed her that the song was by the late Glen Campbell before turning to Jackson.

“I love your voice. You sang the crap out of it. And, it was theatrical,” Shelton said. “A lot of Glen’s records were big sounding for country radio.”

Stefani then took her turn trying to lure Jackson to her team. But, her approach backfired when she told Jackson that she thought the song was crossover and that she could help him be unique. “Stop. Stop,” Shelton told her. “That is a country song.”

Jackson ultimately agreed with Blake and chose to join his team for the season.

? I am still in complete SHOCK!! My heart is so full. Thank you all for your support!! @blakeshelton #TEAMBLAKE LETS GOOOO!!!!! I still love you @gwenstefani and @kellyclarkson. (@kellyclarkson he’s like… old) Best complement ever ?☺️ #24 #foreverhappy #heisold #thevoice @nbcthevoice

Hear Cory Jackson sing “Galveston” by Glen Campbell in the video below.