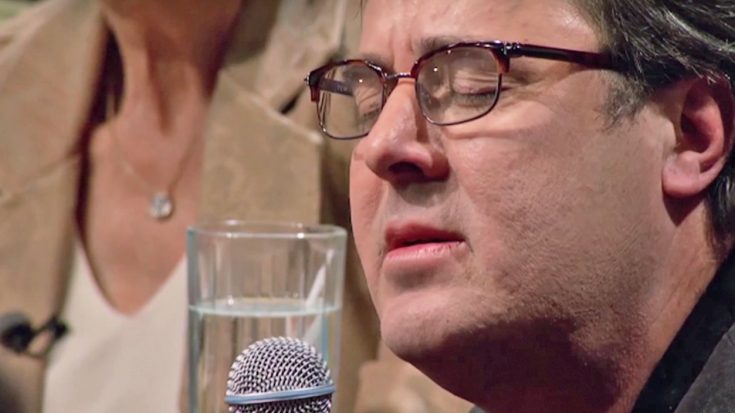 When you write a song like “Go Rest High On That Mountain,” you have to expect to be asked to sing it quite a bit. We have seen Vince Gill sing his iconic on numerous occasions including funerals, tributes, and at his own concerts. Still, the history behind why he wrote it is chilling…

Vince sang "Go Rest High On That Mountain" at the funeral for Officer Eric Mumaw of the Metro Nashville Police Department, who died on Thursday while trying to rescue a suicidal woman from the Cumberland River.

A Heartbreaking Ballad – No Matter When It’s Performed

Each time Gill sings “Go Rest High,” even if it’s not at a memorial or funeral like George Jones’, it really is just as heartbreaking. While performing on a 2010 episode of Country’s Family Reunion, Gill was surrounded by legendary names such as Bill Anderson, Jim Ed Brown, Sharon White, and Dan Tyminski.

This particular episode of the show was very relaxed in that each performer sang from the chair they were sitting in, as opposed to getting up on a stage. As his natural tenor voice delivered each mournful lyric, the eyes of each of his fellow artists closed, taking in every heartbreaking lyric.

Tonight the Nashville community gathered to shine a little light in a time of darkness. Vince Gill led the crowd with a moving performance of “Amazing Grace.”

Even Gill himself sounded and looked like he was getting choked up during the middle of the song.

The History Of “Go Rest High”

Gill began writing “Go Rest High” after country legend Keith Whitley passed away in 1989. He finished the song some years later after his brother Bob passed away of a heart attack. He finally released it in 1995 and it won him two Grammy Awards, the CMA for Song of the Year, and a BMI Award for Most Performed Song.

An interesting, and possibly relatively unknown, fact about the song is that Ricky Skaggs and Patty Loveless sing background on the record.

Watch Gill perform “Go Rest High On That Mountain” on Country’s Family Reunion in the video below.