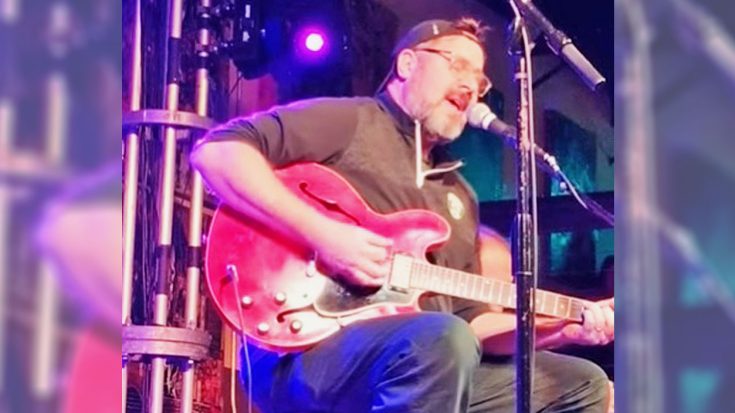 Following Daryle Singletary‘s unexpected death on February 12, 2018, the country music community entered a deep state of mourning. Artists of all ages took to social media to express feelings of grief. Others chose to channel their emotions through music, with many opting to play covers of Singletary’s songs.

The evening of Singletary’s death, one group knew they had to honor him during their weekly show at Nashville’s 3rd & Lindsley. That group was The Time Jumpers, a Western Swing and traditional country group that has featured an ever-changing roster over the years.

One Time Jumpers group member is surely recognizable to most country fans out there. For ten years, Vince Gill offered his talents to The Time Jumpers as a vocalist and guitarist in the group. Gill was the one who took the lead on The Time Jumpers’ tribute to Singletary, though he didn’t sing “Go Rest High on That Mountain” like he usually does when honoring artists who have passed away.

Instead, Gill decided to sing an even older song in Singletary’s honor. The song he chose was the late Buck Owens‘ “Together Again,” which was released in 1964 as the B-side to his number one single, “My Heart Skips a Beat.” Gill is no stranger to singing the song, as he covered it in 2013 for his album Bakersfield.

As we’ve learned, Gill is an expert at channeling emotion into his performances. Watching him sing “Together Again” in the video below, it’s not hard to tell he had Singletary in mind the entire time. When an artist is capable of putting that much feeling into a song, those emotions translate to the audience as well.

Because of that, we’re telling y’all to beware…it’s almost guaranteed that you’ll be in tears by the end of Gill’s tribute to Singletary. So before you hit “play” on the video below, you may want to find yourself a tissue or two.

Out of all of the tributes that have been performed in Singletary’s honor, we’d say this is one of the best. We know we can always count on Gill to honor the country greats who have left us…