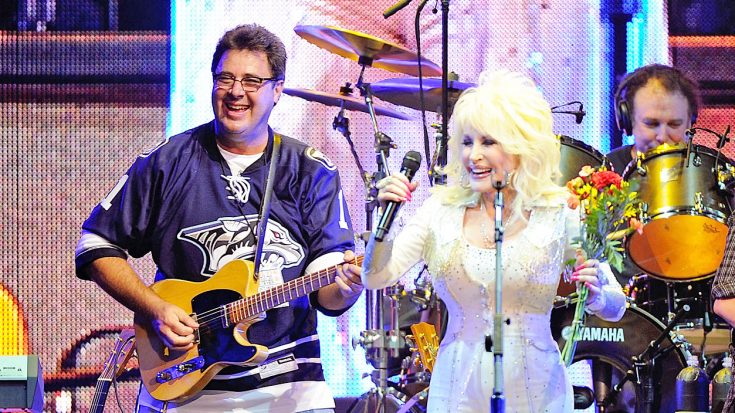 Vince Gill is undoubtedly known as one of the funniest artists in all of country music. Hence the reason why he was such a successful CMA Awards host…because he always had something hilarious to say!

After listening to an old video of Vince sharing a story, we now know exactly where he got his sense of humor from. The source would be none other than his father, J. Stanley Gill.

Vince’s father worked as a lawyer and administrative law judge, but also devoted some of his time to playing in a country music band. As a huge fan of country music, he encouraged Vince to pursue a career in the genre as a singer and musician.

Watching Porter With His Dad

During a performance at the Ryman Auditorium some years ago, Vince recalled how he always used to watch all of the country music shows that played on television. His father loved The Porter Wagoner Show, with Vince saying that he never missed an airing.

Vince joined his father to watch those shows, and grew up with the impression that his dad was a devoted Porter Wagoner fan.

He explained that years later, he was picking guitar with his dad and asked him to play one of Porter’s songs. That’s when his dad confessed that he actually didn’t know any of Porter’s music.

“What do you mean you don’t know any Porter Wagoner? We watched him every weekend,” Vince said.

That’s when Vince’s always-comical father revealed the truth that he had never realized before, “Listen pal, I was watching Dolly.”

After that, Vince learned that his father was a big Dolly Parton fan. So down the road, when Vince was invited to sing “I Will Always Love You” as a duet with Dolly, he knew he had to call his dad.

How His Dad Met Dolly

For whatever reason, Vince waited until after one in the morning to call his dad with his exciting news. He woke his dad up when he called, and he made his displeasure clear. Just as he was about to hang up, Vince spit out that he was recording with Dolly in the afternoon.

Without further ado, Vince’s dad announced that he was leaving and would be on his way. He lived in Columbus, Ohio, while Vince was in Nashville. Vince said that his dad must have done nothing more than hop in the tub real quick and grab a change of clothes before he took off to make it to Nashville in time.

Once he arrived, Vince said that his father was a nervous mess. “Am I really gonna get to meet her, boy?” his dad asked. “Oh God, this is gonna be great.”

Finally, Vince’s dad got to meet Dolly at the studio, where Vince said she fawned all over him and gave him plenty of hugs. They also posed for a picture together, and Vince said his dad was overjoyed.

“Boy I knew my dad for 40 years, and I got that picture back of him and Dolly Parton together,” he said. “Hands down, biggest smile he ever had on his face.”

Now we have a big smile on our face after hearing that story!

The original video of Vince telling that story at the Ryman has since been deleted, but you can listen to him talk about his dad at a 2015 show by tuning in to the clip below. It sounds like Vince’s dad was one funny guy!