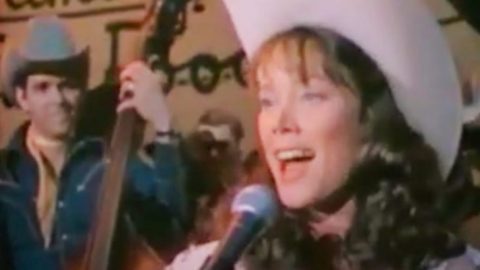 In 1970, Loretta Lynn released her song that went on to become her signature piece.

Called “Coal Miner’s Daughter,” the tune tells the tale of her life growing up in “Butcher Holler.” She sings about her father and how he worked hard in a nearby coal mine, making her a “coal miner’s daughter.”

Over the years, the title of Lynn’s signature song is what people associate with her the most. It’s the reason why the 1980 biographical film about Lynn’s life was titled the same, and following its success, she has forever been labeled as the “coal miner’s daughter.”

The film starred Sissy Spacek, who Lynn personally picked to play her. Spacek performed the songs in the film herself, rather than lip syncing, and went on to win the Academy Award for Best Actress for her role.

Due to the success of the film, it’s become a staple in the households of country fans. But there are still some things about it that you likely never knew before. We’ve gathered up a list of those things for you right here, so click the button below to get started!

1. Spacek Wasn’t Sure About Taking On The Role

Although Lynn hand-picked Spacek to play her, she wasn’t so sure about taking on such a role. In the DVD audio commentary for the Collector’s Edition of Coal Miner’s Daughter, Spacek recalled that she was torn between Lynn’s film and another, especially after Lynn went on late night television and prematurely announced that Spacek would be playing her.

Spacek decided to pray for a sign so she could make her choice. As she was driving with her husband, they had the radio tuned to a classical music station that always switched up the formats at sunset. Once it did, “Coal Miner’s Daughter” started playing. Now if that isn’t a sign, we don’t know what is!

2. Lynn’s Father Was Played By A Drummer

In Coal Miner’s daughter, Lynn’s father Ted Webb was played by Levon Helm, who was a drummer for the Canadian-American rock group, The Band. His role in Coal Miner’s Daughter marked his acting debut.

Despite the fact that he was new to acting, Lynn knew Helm was the perfect person to play her father. She reportedly fainted when she saw him in full makeup and wardrobe for the first time because she thought he looked exactly like her father.

3. Spacek Toured With Lynn Before The Film

As we said earlier, Spacek sang all of her songs in the film on her own. Beverly D’Angelo, who played country legend Patsy Cline, also did all of her own singing in the film.

In order to make sure that she portrayed Lynn as accurately as possible, Spacek followed her on tour before filming. In doing so, she tried to pick up on Lynn’s mannerisms both on and off the stage. Obviously the technique worked, since Spacek received high praise and many awards her role.

All of that time following Lynn on tour passed over to Spacek’s time on the set. She was so dedicated to her role that she always stayed in character, even when she wasn’t filming.

Spacek was so good at not breaking character that those who stopped by to visit the set thought she actually spoke and acted like Lynn. In actuality, it was all part of her character, and the visitors had no idea!

5. All Of The Concert Scenes Were Filmed In The Ryman Auditorium

From 1943 to 1974, The Ryman Auditorium in Nashville, Tennessee served as the home of the Grand Ole Opry. Lynn has performed on that same stage countless times before, making it an important place in her history.

So when it came time to film all of the concert scenes for the movie, it only made perfect sense to head back to the Ryman. There, Spacek performed on the same stage as Lynn and many other country legends.

6. The Set Of Lynn’s Parents’ Home Is At Her Real House

The movie truly kept things close to home for Lynn once it wrapped up filming. The set that was used as Lynn’s parents’ house can now be found on the grounds of her real life home at her Hurricane Mills Ranch.

Those who love all things Lynn can even visit the set if they stop by the ranch. It is included as a part of the Hurricane Mills ranch tour!

7. Spacek Was Nominated For An Award Against Lynn’s Sister

Lynn’s sister, Crystal Gale, is also a country singer, known for songs such as “Don’t It Make My Brown Eyes Blue.” She has experienced a successful career of her own, and was nominated for a Grammy Award for Best Country Vocal Performance for her song, “If You Ever Change Your Mind.”

In an awkward twist of events, Spacek was also nominated in the same category as Gale for her version of “Coal Miner’s Daughter.” However, neither one of them ended up taking home the award that day. It went to Anne Murray instead, for her song “Could I Have This Dance?”

We don’t know about you, but that was pretty surprising to learn! Which of these facts surprised you most about Coal Miner’s Daughter? Let us know!