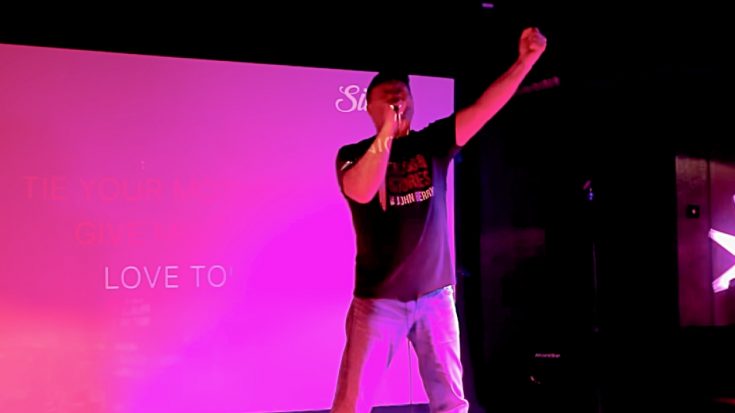 Debuting in 1991 with a hit album that earned him his first No. 1 hit, this beloved country music star surprised a cruise ship full of guests when he stormed the karaoke stage with an unexpected cover!

An onlooker with a keen sense to film the show captured 90s country hitmaker Collin Raye on stage under the pink lights as he belted out this roaring cover of a Queen mega-hit – and you don’t want to miss it!

With more than 21 Top 10 hits on the US Country chart, Raye has become a household name and a recognized figure in the music industry.

As it turns out, he was also a recognized figure on this cruise ship – especially when he grabbed the mic and belted out a song for all to hear.

“At a karaoke event on a cruise ship, country music star Collin Raye blew the crowd away with a surprising performance of a very different kind of song than he is normally known for,” Jim Zimmerlin wrote beneath his video of Raye singing. “Normally one to sing beautiful love songs and catchy country tunes, Collin totally let loose and showed us all his inner rock star…”

Singing Queen’s 1977 chart-topper “Tie Your Mother Down,” Raye blew the audience away with his own take on this rock classic.

Swinging with the mic stand and throwing his fist into the air, it was clear that this was a joyous occasion for Raye – and one that very few get to see!

Zimmerlin continued on saying that “fans of Queen, Brian May, and Freddie Mercury will probably get a kick out of seeing Collin’s karaoke performance…”

True to his word, this fun and fiery karaoke show from country star Collin Ray will make anyone’s day!

Check out the full surprise performance below and let us know what you think in the comments.