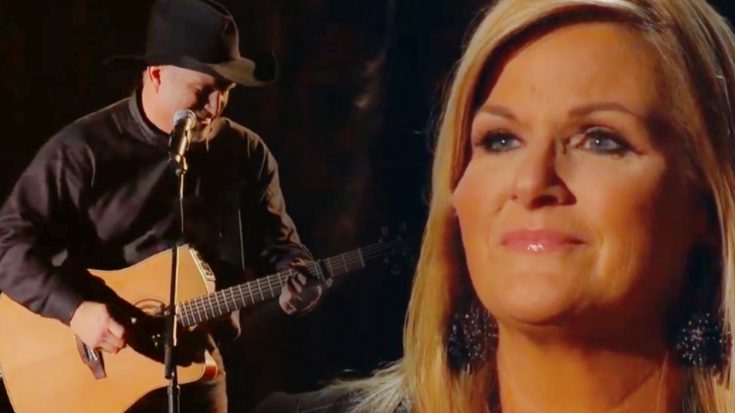 Garth Brooks‘ 2018 CMA Awards performance was one of the most buzzed about…and that’s before it ever even took place!

During a press conference in October, Brooks revealed that he and his wife, fellow country superstar Trisha Yearwood, would simply be attending the ceremony as guests. This news came as a shock, since at the time Brooks was the reigning CMA Entertainer of the Year, having won the award in both 2016 and 2017.

Then, Brooks went on to explain why he would not be performing at the awards. It all had to do with the fact that he wanted to debut a new song that night.

“…It’s a song about the strength of a woman. And for me, that’s Trisha. So, what I offered to the CMAs was, ‘Let me sing this to her that night…They kinda came back and said, ‘Hey look, something new that’s a ballad probably doesn’t work for us.’ So, cool. I’ll find some other way for her to hear it. So, right now, we’re just coming to attend.”

Garth Gets His Way

But that all changed when weeks before the awards, the CMA announced that Brooks had been added to the ceremony’s lineup of performers. Fans couldn’t help but wonder if Brooks got his way, or if he caved in and would sing something the CMA preferred.

As the days ticked by, it was slowly revealed that yes, Brooks would be surprising Yearwood with his new song at the CMA Awards.

Then came the night of the ceremony, and fans anxiously awaited the debut of Brooks’ romantic new song. But no one was more anxious than Yearwood, who admitted on the red carpet that she’s not a huge fan of surprises.

.@garthbrooks and @trishayearwood are live from Nashville on the #CMAawards Red Carpet thanks to ABC's All Access, presented by @Google. We can’t wait to hear Garth perform tonight! pic.twitter.com/inyecTQDdJ

Finally, the moment everyone had been waiting for arrived well into the ceremony. With nothing but his own guitar to back him up, Brooks took to the stage and performed his brand-new song, “Stronger Than Me.”

Serenading his wife of nearly 13 years, Brooks fought back tears throughout his entire performance. He kept getting choked up, and you could even hear a few sniffles as he tried to maintain composure.

He somehow made it through the whole song without breaking down, but the same can’t be said for Yearwood. She let the tears flow freely, especially when Brooks sang the heart-tugging final lines, “If I have a choice, I pray God takes me first. ‘Cause you’re stronger than me.”

I’ve been fortunate to travel all around and see these two people in concert since 1989. This performance is absolutely as raw as it gets. Their love story. Make me want to be better. This is why im a die hard believer in @garthbrooks @trishayearwood #StrongerThanMe ❤️ pic.twitter.com/oH40a4xZ39

Trisha’s Tears Give Her Away

Speaking to various media outlets backstage at the awards, Brooks admitted that Yearwood had just lost a bet because of his performance. Apparently, she had bet that she wouldn’t cry when he sang.

Brooks claims that he didn’t cry during the performance. But it was clear to everyone watching that Yearwood was teary-eyed. “She lost the bet, then,” Brooks joked.

Can you really blame her? We were certainly crying our eyes out when we watched Brooks’ sweet serenade!

Relive that special moment by tuning in to the video below.