Dog Sings Dolly Parton’s ‘I Will Always Love You’ 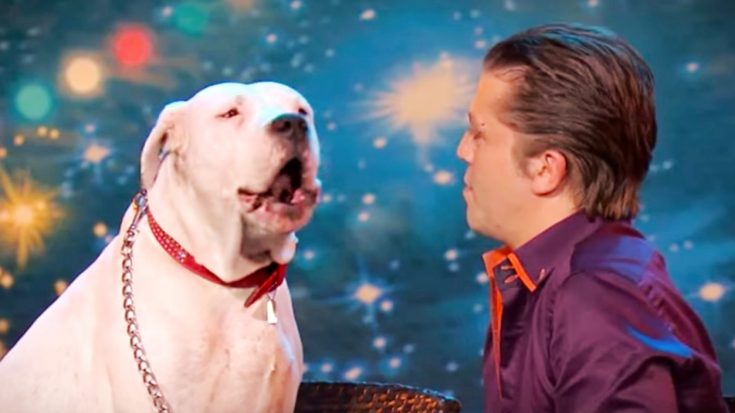 Between Dolly Parton‘s original rendition and Whitney Houston’s famous cover, “I Will Always Love You” is one of the most well-known songs in the world. Because of this, it’s a go-to song for people to cover on singing competition shows.

From The Voice, to American Idol, to the various Got Talent shows, covers of “I Will Always Love You” can be found in abundance. Since the song is so beloved, it’s a risky one for anyone to tackle. But if they pull it off, they manage to instantly establish themselves as a frontrunner.

However, at this point the song almost seems overused, so anyone who performs it really has to make themselves stand out. That’s exactly what one contestant did on Belgium’s Got Talent.

During an episode of Belgium’s Got Talent in 2015, a contestant named Lady Xena took to the stage. But she wasn’t the typical type of contestant that the judges were used to seeing, because she’s a dog!

Joining her owner on stage, it was revealed that Lady Xena would be singing to Houston’s rendition of “I Will Always Love You.” We’re sure that the judges were a bit skeptical at first!

But if they were, those feelings soon faded away. It only took a couple of howls for Lady Xena to win everyone over. And things only got better from there.

If you were to stop watching Lady Xena’s audition after the first few times she “sings,” you may just think, “Oh that was cute.” But the further into her audition you get, the more you’re sure to be impressed by her remarkable talent.

We’re sure you all know about that famous high note in Houston’s version of “I Will Always Love You.”

You know, the one that you belt out at the top of your lungs while driving in your car or singing in the shower?

Well, you can bet that everyone was on the edge of their seats as Lady Xena got to that part of the song, waiting to see if she would go for that famous note. She did indeed, and did so with gusto!

The judges were in stitches by the end of Lady Xena’s audition, clearly amused by what they had just witnessed. You’re sure to be equally entertained when you watch her performance below!