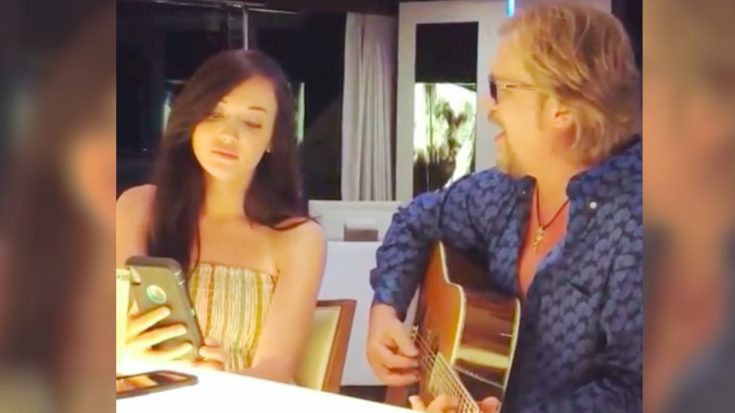 When one country icon covers another, the resulting performance is spectacular.

Such can be said about one short cover performance by country superstar Travis Tritt. Known for songs such as “Anymore” and “It’s a Great Day to Be Alive,” Travis rose to prominence as the “outlaw” in the famed “Class of ’89” in country music.

Travis is still a force to be reckoned with in the industry. Those who turn out to watch his shows have been treated to some outstanding talent…not just from Travis himself, but from one of the artists he occasionally brings on tour with him.

That artist is none other than Travis’ only daughter, Tyler Reese. The talented young singer is on the rise in the country music community, and released her debut single, “Perfect,” in 2017.

Fans were first introduced to Tyler in 2013 when she joined her father to record a duet. The pair sang “Sometimes Love Just Ain’t Enough,” which was originally recorded by Patty Smyth and Don Henley of the Eagles.

Travis and Tyler’s version of the song appeared on Travis’ album The Storm, and the song was later released as a single. The official music video they filmed for the song has since generated millions of views.

Through the years, Travis and Tyler have collaborated many more times, often opting to perform old duets by beloved country icons. That’s exactly what they did in a video Tyler shared on her Instagram, as they chose to revive a famous father-daughter duet.

The song Travis and Tyler performed was “Don’t Cry, Joni,” which was recorded by Conway Twitty and his daughter, Joni Lee, who was only 16 years old at the time. They released the duet as a single in 1975, and it was a big success.

The song, which tells the heartbreaking tale of a couple who goes their separate ways, was beautifully covered by Travis and Tyler. Their dazzling rendition of the duet can’t even be summed up in words, so just go ahead and hear it yourself by tuning in to the video below.

If you’ve never heard Tyler sing before, prepare to be amazed. She has such a stunning voice. Big things are in store for that girl!

Moments like these I’ll remember forever❤️ love when I get to sing with my Daddy #MyFavoriteDuetPartner Song: Don’t Cry Joni by Conway Twitty and his daughter Joni Lee