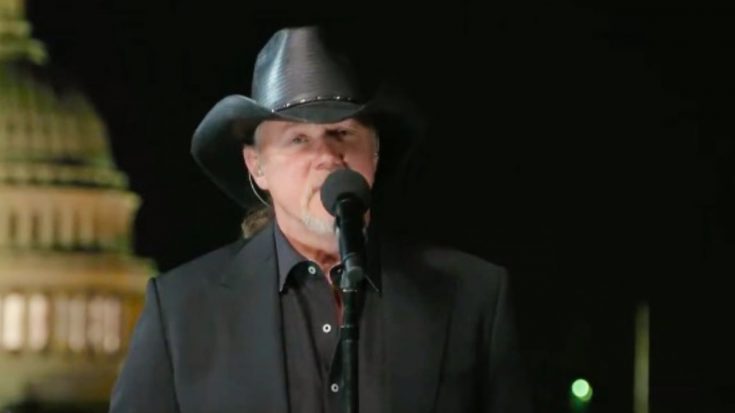 Fans don’t have to dig too deep into Adkins’ catalog to find songs that honor America and its military. From “Arlington” to “Still a Soldier,” Adkins expresses his patriotism in many of his songs.

On top of releasing songs about the U.S. military, Adkins also devotes his time to them. He has gone on numerous USO Tours, and has been an outspoken supporter of veterans and active duty servicemen and women.

Because of all of this, Adkins is a go-to entertainer for any patriotic holiday or date set aside to honor/remember our military and veterans.

In 2020, Adkins performed for PBS’ National Memorial Day Concert. During the concert, he sang “Still a Soldier” and “If the Sun Comes Up.”

I’m honored to be a part of @MemDayPBS on @PBS tonight at 8/7c. Join us in remembering all who have given their lives for our nation and their Gold Star families. We will also pay tribute to our heroes in the fight against #COVID19. You can join me in remembrance on PBS, and on the @MemDayPBS Facebook, YouTube and website. #MemDayPBS #MemorialDay2020

PBS also invited Adkins to participate in its A Capitol Fourth special for the 4th of July. A Capitol Fourth celebrated its 40th anniversary in 2020, so Adkins was involved in a historic production.

Adkins previously appeared on the program in 2017, and sang “My Country, ‘Tis of Thee.” He revisited the same song when he performed on A Capitol Fourth in 2020.

Due to the circumstances at the time, Adkins wasn’t able to sing in front of a live audience like entertainers have done for past A Capitol Fourth concerts. His performance was pretaped, and based on what he was wearing, we’d say it was taped at the same time he filmed his performances for the National Memorial Day Concert.

Tune in below to watch Adkins sing “My Country, ‘Tis of Thee” for the 2020 production of A Capitol Fourth. His performance is as patriotic as it gets!