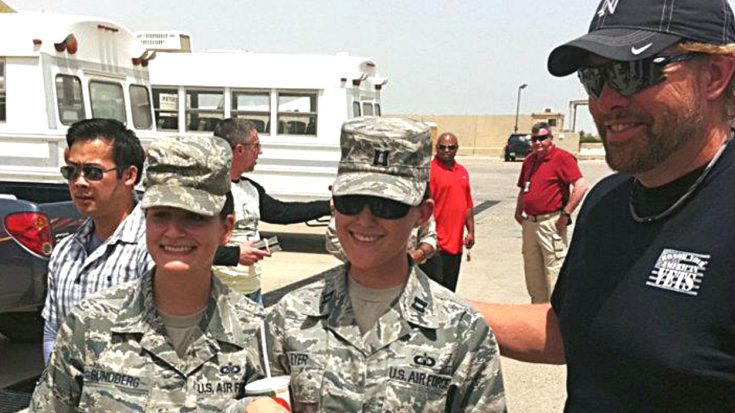 For years, Toby Keith has been one of country music’s most outspoken supporters of the U.S. military. He’s performed at a number of patriotic events, gone on USO tours overseas, and recorded songs that celebrate troops, such as “American Soldier.”

Keith has generated a great deal of respect for being so supportive of the military. But he’s also received some grief over his support, and by some, we mean a lot.

He Fills A “Void” Others Are Afraid To Fill

During an extensive interview with azcentral before his performance at the Country Thunder festival, Keith talked about all sorts of topics, including his USO tours. Keith said he’s been “blessed” to do them for so many years, and that he can help the USO fill a “void” by being a regular performer:

“It’s not like the old days when Bob Hope went out and it was cool for everyone to go. If Ann-Margaret and the Playboy bunnies and Tony Bennett and all those guys went on the USO Tour, it was great,” he said. “You go on the USO Tour today and you’re just gonna get hammered in the media and get all the checkmarks on the right side from all the bloggers and the haters.”

It’s the fear of being labeled a “right-wing” voter that Keith believes has kept many artists from doing a USO tour, since it can result in so much grief.

Nothing Political About It

For Keith, playing for the military has never been a political thing. He simply wants to show his support for a group of people that he views as hard workers:

“They don’t get drafted by the government. They volunteer. And when the government asks them to go do something, they go. I have tremendous respect and admiration for their valor and they left a mark on me. So the rest of that stuff doesn’t matter.“

Even though Keith has never connected his military support to politics, he feels people automatically make that connection in their minds. That connection was only strengthened after he performed for President Trump’s inauguration, a performance that resulted in a great deal of hate being sent his way.

Keith points out the double standard over that whole thing, saying no one ever hated on him when he played for President Obama years ago:

“I didn’t get grief for playing the Nobel Peace Prize for Obama. The people writing, as long as it’s their guy, it’s OK. When it isn’t their guy, you’re the a–hole. You just have to learn to live with that.“

Shrugging Off The Hate

Because of the labels that have been attached to him, Keith says that in 25 years he’s had 30 different artists refuse to work on a project if he was involved. But he doesn’t let stuff like that bother him, he just continues to do what he thinks is right.

“You just trust the ones around you and let the idiots go be idiots,” he said to close the interview.

No matter what people say, Keith will always be dedicated to the troops. That dedication shows through in every one of his USO performances, including the one below. Hope y’all enjoy it.

What are your thoughts on everything that Keith had to say in this interview?