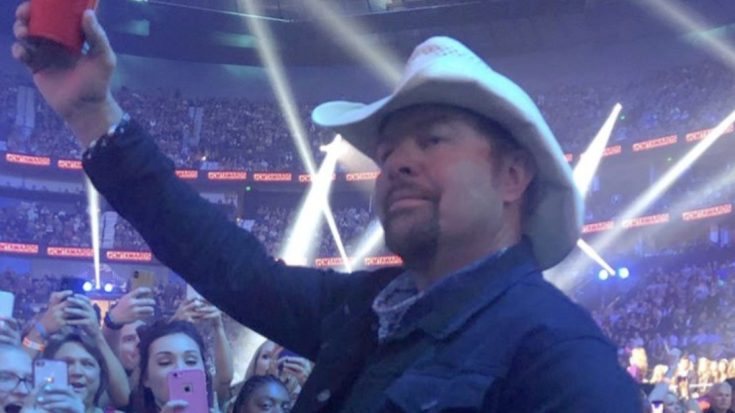 Country music star Toby Keith is thanking fans for their love and support as he fights cancer. In a post made to his social media accounts, Keith shared screenshots of well wishes he has received from fellow country artists such as Jason Aldean and Jake Owen, other celebrities including Lance Armstrong, Troy Aikman, Dwayne “The Rock” Johnson and numerous posts from his massive fan base.

The montage included a note from the 61-year-old that simply read, “Thank you for all your love and support. -T.” Toby’s debut single from 1993, “Should’ve Been a Cowboy,” played in the background.

Toby Keith revealed his stomach cancer diagnosis two months ago with a statement that read, “Last fall I was diagnosed with stomach cancer. I’ve spent the last 6 months receiving chemo, radiation and surgery. So far, so good. I need time to breathe, recover and relax. I am looking forward to spending this time with my family. But I will see the fans sooner than later. I can’t wait. -T”

The singer has remained quiet about his recovery, but canceled all of his remaining 2022 tour dates in order to focus on his health.

Toby Keith became one of the greatest country music voices of the ’90s with hits such as “He Ain’t Worth Missing,” “A Little Less Talk and a Lot More Action,” “You Ain’t Much Fun,” and “We Were In Love.” His unlikely rise to stardom started when he landed a record deal with Mercury with the help of a flight attendant who gave a copy of Toby’s demo to a Mercury Records executive on a flight. That executive, Harold Shedd, liked what he heard and signed Keith after seeing him perform live.

Toby Keith saw unprecedented success, not only as a country singer, but as a businessman. Keith is now one of country music’s wealthiest celebrities thanks to a restaurant franchise, a clothing line, and a record label partnership.

Keith is known as much for his patriotism and generosity as he is for his voice. Toby has long supported charities such as The Toby Keith Foundation, a childhood cancer support center that opened OK Kids Korral, “a cost-free, convenient and comfortable home for pediatric cancer patients receiving treatment at The Children’s Hospital at OU Medical Center, Stephenson Cancer Center and other nearby facilities.”

In 2019, the singer told The Boot that giving back through the OK Kids Korral is one of the greatest things he will ever do.

“It’s an old frontier cabin, kind of, with 16 full suites, a chapel, a theater, a storm shelter, an indoor/outdoor playground — it’s an amazing facility,” Keith said of the home. “It’s probably the best thing, outside my family, I’ll ever do.”

Keith added that it was special to him to choose one cause that he was passionate about and support it, year after year.

“I think when you find that one thing that really moves you, you can go accomplish it, and it’s a beautiful thing,” Keith said.