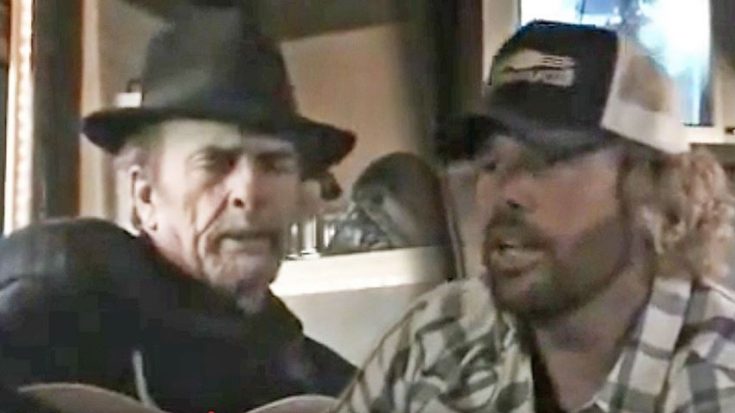 When country legend Merle Haggard passed away in 2016, Toby Keith lost more than a member of his professional community. He lost a close friend and good buddy; one he referred to as “the greatest songwriter of his lifetime.”

While some friendships take some time to form, Merle and Toby had one of those friendships that resulted from instant chemistry. They clicked the moment they met.

Years after The Hag’s April 6, 2016 death, he is still greatly missed by all who knew him.

A Mentor And Great Icon

Toby Keith was one of those who most noticed the void left by Haggard’s absence. He remembers the country legend as a mentor and a great icon he looked up to.

In a 2017 interview with The Boot, Toby admitted he missed Haggard’s music, but it’s their friendship he missed the most.

“First day I met him, I wanted him to be a great guy,” Toby said. “He was a sweet man: He pulled me up on the bus, he got a guitar out, and we played on the bus for about an hour and a half. It was that way just about every time I saw him; he always took time to sit down, talk, drink a little whiskey and get the guitar out and play something.”

While Merle may be gone, his memory and legacy remain.

Hangin’ On The Bus

Some of the most memorable moments Toby and Merle shared took place on the “Beer For My Horses” singer’s bus. He and The Hag were hanging on the bus, doing some pickin’ and grinnin’ before a CMT special. Two of the biggest stars in country music, joined by a friend, artist Scott Emerick,  jammed on a couple of classics: “I Take A Lot Of Pride In What I Am” and “It’s All In The Movies.”

The smiles and laughter shared between the two reflect the depth of their genuine friendship. It’s easy to see the two shared a mutual admiration.

Sit back and watch this rare footage of Toby and Merle reminding us why we love country music so much. Listening will reassure you the Hag will never be farther away than his next song.