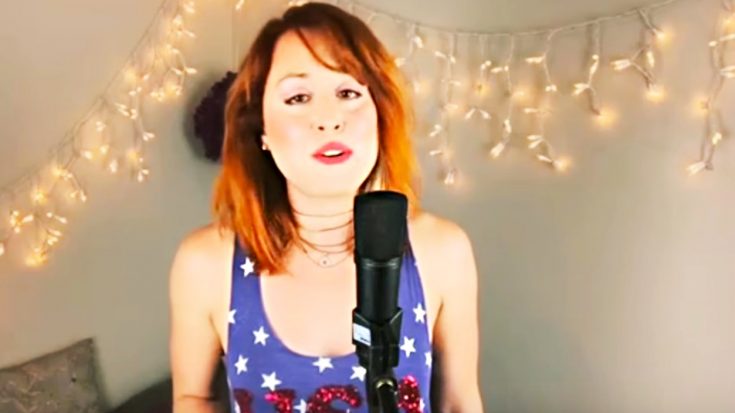 Every time the 4th of July comes around, country fans crank up some of the most patriotic songs in the genre. From Toby Keith‘s “Courtesy of the Red, White And Blue,” to Brooks & Dunn‘s “Only in America,” and of course, Lee Greenwood‘s “God Bless the USA,” there’s no shortage of patriotic songs at country fans’ disposal.

Another song that always gets played on the 4th of July is Martina McBride‘s “Independence Day.” But unlike the songs mentioned above, “Independence Day” isn’t about celebrating America. It’s about a woman ending an abusive relationship after she sets fire to her house with her husband inside.

The song’s events take place on the 4th of July, therefore offering a double meaning to the song. On the surface, it’s about Independence Day the day. But on a deeper level, it’s about the woman earning her “Independence Day” after finally gaining freedom from her abuser.

So when it came time for fan-favorite former Voice contestant Casi Joy to offer up her weekly cover video during 4th of July week in 2018, “Independence Day” seemed like a good pick. As she explained, people were asking her to cover the song for quite some time, and she “figured this was the perfect time to finally tackle it!“

Joy fully embraced the patriotic spirit of the approaching holiday, wearing a festive blue tank top with white stars and “USA” written across the front in glittery red print. But nothing was more dazzling than her performance of McBride’s highly respected hit.

How Did She Handle It?

Anyone who has ever heard “Independence Day” knows it’s not an easy song to sing. There’s a lot of high notes crammed in there, since McBride can tackle such notes with power and ease.

But beyond that, the heavy emotions involved in the song make it hard for people to sing. If someone can’t connect to its tragic story, it comes across as not being genuine, therefore making it unenjoyable.

Of course, if you know Joy, then you know that none of these things were going to be a problem for her as she sang “Independence Day.” Her firecracker vocals fit the song like a glove, and she poured her heart into portraying the song’s story in all of its raw honesty.

Overall, this has to be one of the best covers of “Independence Day” out there. Go ahead and give it a listen. What better way to ring in the 4th of July?