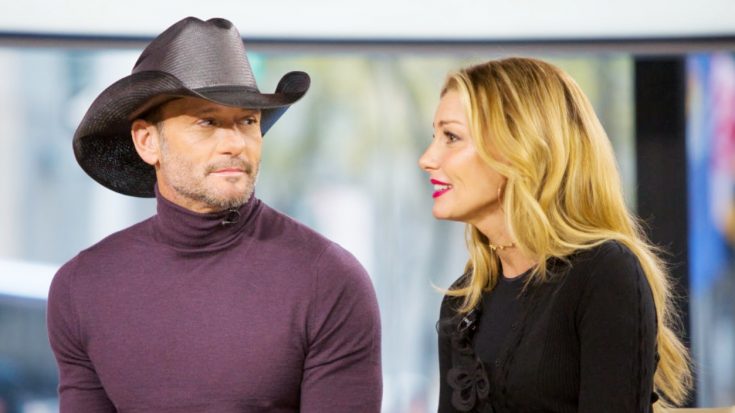 While Faith Hill never went on hiatus from her career, she took a step back for a few years, and for a good reason.

Instead of devoting the majority of her time to stages and recording studios, Faith channeled most of her energy into caring for her three daughters with husband Tim McGraw…Gracie, Maggie, and Audrey.

Together, the couple famously kept their girls out of the spotlight, only allowing them to make bigger and grander public debuts as they grew older. Over time, Tim and Faith have even allowed their girls to perform on stage, showing that all three have inherited their parents’ talents.

Hard to believe it, but two of Tim and Faith’s girls are now old enough to be college students. Oldest daughter Gracie turned 21 in May, and Maggie’s 20th birthday followed in August. The two girls have been away at school for a while, leaving little sister Audrey as the only one still at home.

During a 2018 interview with Taste of Country Night‘s Sam Alex, Tim shared that Audrey was in her junior year of high school at the time. Before you blink, it will be her turn to go off to college as well, leaving Tim and Faith as empty-nesters.

There is no man that could be loved more than you. Happy Birthday from your four girls.

While it has certainly been hard on Tim since Gracie and Maggie moved out, he said that the whole thing has been much more challenging for Faith. Opening up, Tim said recent years have been “really tough” on his wife as she has adjusted to her daughters being away from home:

“It’s toughest on mom, because she is the one…they always want mom to do stuff for them. Sometimes she just misses them and doing things for them everyday and doing things moms do,” he said. “I think it’s really tough on her sometimes.”

Los Poblanos outside of Albuquerque, NM.

As tough as it has been to be away from their girls, Tim knows that they and Faith will be alright. After all, he believes she has passed her strength and confidence on to them:

“They had such a great role model in their mother to model themselves after to go out and face the world as a woman because of who was involved in raising them,” he said.

Yesterday was Audrey's bday. We made gingerbread houses in the hotel's kitchen. We might be in the desert but it's still Christmas!!

This isn’t the first time we’ve ever heard Tim gush about Faith’s qualities as a mother and role model.

During a famous interview for Oprah’s Master Class in 2014, Tim broke down while describing just how wonderful of a mother Faith is. “I think about having three daughters and having her for their mom,” Tim said. “I mean, it’s a pretty cool thing for those girls to have her.“

You can watch that emotional interview below.

Even though these past few years have been hard on Tim and Faith, they have every reason to be proud of their girls. They’re talented and beautiful young ladies!