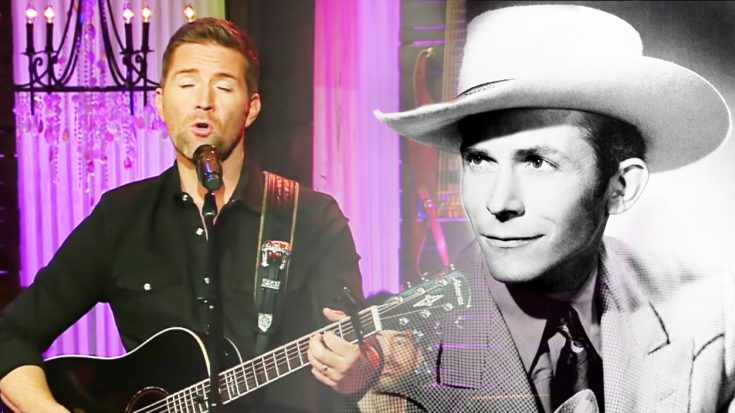 If you’re going to cover Hank Williams, you better have the voice (and the faith) to do so. Luckily, Josh Turner‘s deep sound and unwavering convictions allowed him to give one of the best cover performances we’ve heard of Hank’s “I Saw The Light.”

Hank wrote the country gospel tune “I Saw The Light” in the late 1940s. The song might not have been a chart-topping hit, but its legacy as a standard hymn far exceeded Hank’s expectations. He realized the power behind the song and began using it as a closing song for his acts. Now, artists and choirs all over the world cover the song.

One such performer is none other than Josh Turner. Having gained popularity with his debut album’s track “Long Black Train,” Turner used his music to tell a story of resisting temptations that could condemn your soul. This quickly put him on the map as one of country music and gospel’s go-to artists.

Now, he is at it again – this time creating an entire album of country gospel hits. Some are originals, while others, like “I Saw The Light” are covers of classic standards.

In an official live recording at Gaither Studio, Turner gave a heartfelt performance full of faith and heavy with twang. The intimate setting allowed the gospel singer to provide a passionate set – his deep baritone voice echoing throughout the room.

His choice of gospel music and his head-to-toe black outfit is reminiscent of Johnny Cash – combining the uplifting lyrics with the visual of the darkness humans have to overcome to reach “the light.” As he belts out the words of legendary performers past, we are reminded of the various stages of country music as he is surrounded by hanging acoustic guitars, banjos, and electric guitars. The whole performance really pulls together the old and the new for a spectacular moment of praise.

Turner explained in a press release that the reason why he wanted “I Saw The Light” on the album is that he’s “a big Hank Williams fan, and [he’s] been familiar with the song pretty much [his] whole life.”

"I Saw The Light" Commentary

I’m a big Hank Williams fan and excited to have recorded “I Saw The Light” on my upcoming new album I Serve A Savior. Get the song today when you digitally pre-order the album, click here for options: http://strm.to/IServeASavior

His ability to take a classic and create something so beautifully new while staying true to the original interpretation is truly amazing.

You can watch his full performance below.