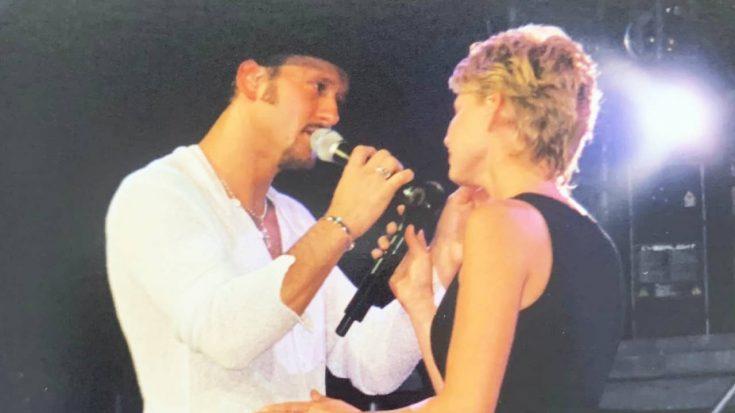 In 1996, Tim McGraw was considered one of the hottest country singers. He had three number one albums under his belt and was about to embark on his Spontaneous Combustion Tour, which ended up being the most successful country tour that year.

Before he could head out on the road, he needed an opening act. Enter Faith Hill, who was a rising star at the time. They eventually began dating while on tour together, fell in love, and were married on October 6, 1996.

There isn’t much footage from that tour, but McGraw himself shared a snapshot of their blossoming love on his social media pages on August 31, 2020.

“Thought I’d take y’all back a bit….From the Spontaneous Combustion Tour… we just started dating…..,” he captioned the photo of him and Hill singing a duet together.

Thought I'd take y'all back a bit….From the Spontaneous Combustion Tour… we just started dating…..:)

You can tell they were already in love when this photo was taken just by the way they are looking at each other. 24 years later and they are more in love than ever! Just recently, the couple celebrated McGraw’s latest album release with their three daughters and the “Humble and Kind” singer made it a point to slow dance with his love.

The girls and I surprised Tim with our first ever family album release party. Yeah, I know…..Honestly, it is the truth. We have never listened to one of our new albums with just the girls. Ever. An unforgettable evening for what in my humble opinion is one of the greatest albums Tim has ever recorded. We listened to the double vinyl records blaring from the speakers!!!!!! A night we will never forget. Here is a small clip of our special evening celebrating the man we all adore in the Mcgraw house of women. We are so proud of this man!!!!!! He has created a masterpiece. More to come……. #DamnSureDo

Watch Tim and Faith talk about the first time they met in 1995 – doing the electric slide on stage!