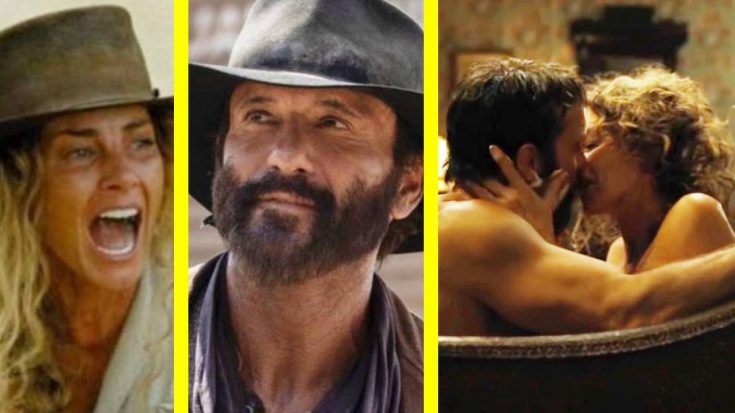 For months, we’ve been seeing teaser clips for the upcoming Yellowstone prequel 1883. Starring Tim McGraw, Faith Hill, and Sam Elliott, the show will follow Tim as James Dutton, Yellowstone‘s John Dutton’s grandfather, as he and his family travel from Texas to Montana to start a new life. Sam Elliott will be playing a man named Shea Brennan, who TVLine described as “a tough-as-nails, handsome cowboy with immense sadness in his past.”

On November 21, 1883 released the Extended Preview and show us more of the cast, story, and a little more skin from the resident country stars on set. In one clip, McGraw’s James Dutton is in a bathtub with his wife Margaret, played by real-life wife of 25 years, Faith Hill.

Tim and Faith are on the latest cover of People Magazine, which included an in-depth interview about their marriage, working together, and so much more.

While on set, there were many difficult days of filming, but none more so that *that* bathtub scene. She explained to People, “It was really uncomfortable for me personally because I’m a very shy person in that type of situation. I obviously feel comfortable with my husband, but this is different. For intimate scenes, I feel like that belongs to us.”

Creator Taylor Sheridan understood Faith’s concerns and made sure to close the set that day to as many people as possible. Faith truly appreciated it and said, “It turned out to be beautiful.”

Both have acted before, but never together so they had to lay down some ground rules so their work lives and personal lives do not get confused.

“We have made it a point not to work on our scenes together until we’re on set,” Hill said in the interview. “It’s important that we react to one another naturally as characters, not as husband and wife.”

But McGraw has loved starring along side his wife, saying, “It’s been incredible to do scenes together and to watch her work,” even when she has to slap him during a scene!

He revealed, “We had this scene where she has to slap me. I was expecting a finger slap but it was a paw to the jaw. There was 25 years of pent-up aggression going on! When you see it on screen, you realize it was a genuine hit.“

We can’t wait to watch them work together, and see that slap scene. We are able to soon! 1883 is premiering on Paramount+ on December 19th! Until then, watch the full trailer below.