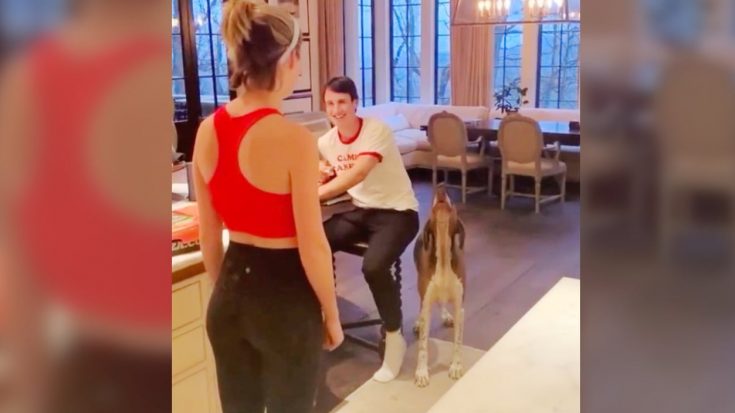 Despite their status as country superstars, Tim McGraw and Faith Hill managed to raise their three daughters almost entirely out of the spotlight. Gracie, Maggie, and Audrey were hardly ever photographed as children, and to this day, their parents rarely share photos of them.

But now that the girls are older, Tim and Faith are a little more willing to post videos and photos of them on social media. We’ve especially gotten to know middle daughter Maggie, who moved across the country for college in 2016.

Faith was the one who took Maggie to school, and the mother-daughter duo documented their road trip on social media. They even shared a video of them singing along to Taylor Swift’s “Bad Blood.”

Like her parents, Maggie is a talented vocalist. Tim was happy to introduce his daughter during a concert of his and Faith’s in 2018, and let her take the stage.

The crowd roared as Maggie sang. That girl has a powerful set of pipes!

Maggie also put her pipes on full display in a more humorous performance that took place in the kitchen at home. And this performance was a duet of sorts!

Due to the extended breaks college campuses were taking at the start of 2020, Maggie found herself home from school a little earlier than she planned. While other students in similar situations may have been bored out of their minds, Maggie decided to fight off boredom by singing with the McGraw family dog!

Tim filmed a comical video of Maggie howling at their pet dog, Stromboli, who is a Bracco Italiano. Stromboli was silent at first, but as Maggie’s howls grew more persistent, he decided to join in on the song.

Before long, the pair was singing a full-on duet that is quite amusing to witness. Check it out in the clip below.

“Stromboli is happy that Maggie is home from college!!!!!” Tim wrote in the video’s caption.

It does seem like Stromboli is one happy pup now that his duet partner is home for a while!

Stromboli is happy that Maggie is home from college!!!!! Video credit: DAD #italianbracco