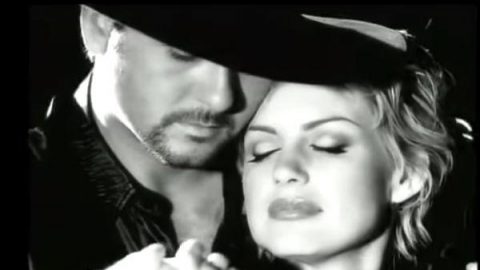 Just two years after the were married, this superstar country couple recorded a remarkable duet that topped the country charts in 1998.

The third album from Faith Hill featured the second recorded duet by the pair and it was a strategic move that helped make the record go multi-platinum. Hill’s first duet with husband Tim McGraw, “It’s Your Love” landed immediately in the No. 1 chart position and earned a handful of awards including two Grammy nominations.

Putting together another duet by these talented performers made perfect sense.

Released in 1998, Faith hit the number two position on the US Country Albums chart and issued four No. 1 singles for the superstar. It has often been said that the album was the catalyst for her continued success and genre-crossing ventures later.

The duo recorded “Just To Hear You Say That You Love Me” and released it as the second single from Faith. The song reached the No. 3 chart spot in the US and charted internationally as well. Notably, the music video for the mega-hit was composed mainly of close-ups because Hill had recently given birth to her second daughter and had the baby resting in her lap while filming. This caused the director to use a majority of head-shots and upper-body footage for the final video.

You can definitely tell that these two are mad about each other in this video and the song itself is an ode to undying love! It’s incredibly romantic and a fitting song for them.

Check out the video below for Faith Hill & Tim McGraw’s second-ever duet!