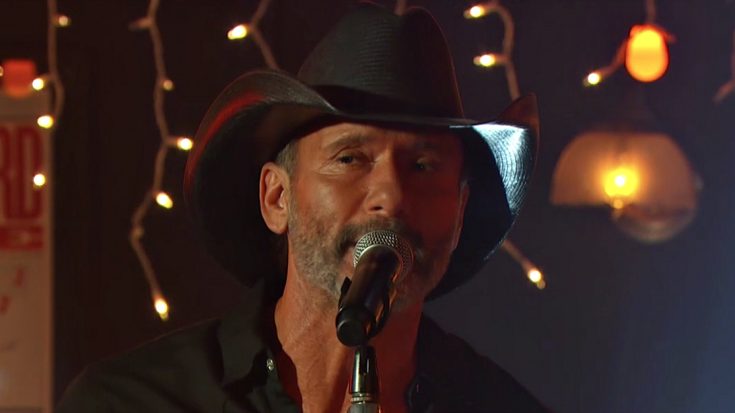 The track was written by Lance Miller, Marv Green and Jimmy Yeary. It has McGraw singing about how he seeks out his mama for comfort after hearing some bad news about a friend.

Even though McGraw didn’t write the song himself, it spoke to him immediately:

“I fell in love with it right away, certainly because of what it says on a personal level about, you know, everybody loves their mama, so to talk really specifically about calling your mom and everything that is said in it made a lot of sense to me,” Tim told The Boot.

“I Called Mama” went on to strike a chord with listeners around the world.

The song reached the 11th spot on the U.S. Country Airplay chart and claimed the 13th position on the Hot Country Songs chart. It was a crossover hit as well, and peaked at the 61st position on the all-genre Billboard Hot 100.

So when McGraw signed up to perform at the 2020 ACM Awards, “I Called Mama” was the song he brought along.

Due to current circumstances, the ACM Awards were not able to take place in April like they usually do. The ceremony was rescheduled for September 16, and was moved from Las Vegas to Nashville.

Instead of performing at just one venue, artists spread out between three: The Ryman Auditorium, the Grand Ole Opry House, and the Bluebird Cafe.

McGraw delivered his performance of “I Called Mama” from the Bluebird.

Even though we’ve been listening to “I Called Mama” for months, the song hasn’t lost its emotional power. It’s even more touching to hear McGraw sing it live like he did for the ACM Awards.

If you missed his performance, or simply want to watch it again, look no further than the video clip below. This song is one that country fans are sure to treasure for years to come.

.@TheTimMcGraw always knows how to pull on our heart strings. You can stream the entire #ACMawards on @CBSAllAccess! pic.twitter.com/uF7M0XZqZ4