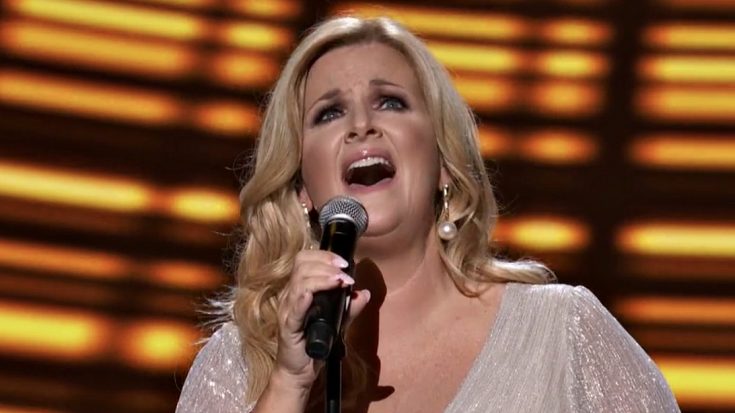 The 55th annual Academy of Country Music Awards are underway! Unlike years past, this year’s event was held in Nashville after being rescheduled due to the Coronavirus pandemic. The move from Las Vegas to Music City and the date change from April to September posed a challenge for event coordinators, but they pulled off a safe, socially-distanced show with the use of three different iconic Music City venues: the Grand Ole Opry, the Ryman Auditorium and the Bluebird Cafe.

In addition to handing out awards for some of the years’ greatest musical accomplishments, the night featured performances from some of country music’s biggest stars. Perhaps one of the most anticipated performances of the event came from the Queen of Classic Country Music, Trisha Yearwood. Yearwood took the stage at the Grand Ole Opry to pay tribute to those in the country music industry that we’ve lost in 2020.

Yearwood sang “I’ll Carry You Home,” a song from her 2019 album Every Girl. It was the first time the star performed the song live, and as she sang a montage of photos of stars who died this year were displayed on a screen behind her. Kenny Rogers, Joe Diffie, Charlie Daniels, John Prine, Jan Howard, Jimmy Capps, Busbee, and many more were honored.

Trisha’s performance of the emotional ballad was a beautiful way to honor the late industry greats who have impacted us with their music. Watch Trisha Yearwood sing “I’ll Carry You Home” live at the ACM Awards in the video below.