Tim McGraw Brought Two Guests To NFL Draft, But Neither One Was Faith Hill 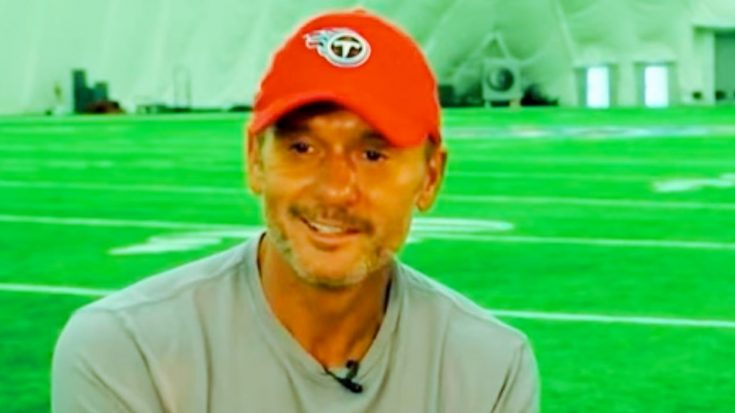 Nashville may be known as Music City, but for one weekend, it transformed into Football City.

During the NFL’s early years, the league would host its annual draft in various cities across the country. New York City eventually became the draft’s seemingly permanent home in 1965, and the draft was held there for a whopping total of 50 years.

In 2015, the draft finally left its New York Home and was held in Chicago. It also took place in the Windy City in 2016 before moving to Philadelphia in 2017 and Dallas in 2018.

Nashville was chosen as the draft’s home for 2019, and there was a wealth of buildup leading up to the event. Since there are so many country stars in town, many were happy to help with the events connected to the draft, including Luke Bryan, Dierks Bentley, and Chris Young.

One of country music’s most enthusiastic supporters of the NFL Draft is Tim McGraw. The country superstar met with Tennessee Titans coach Mike Vrabel days before the draft kicked off to chat about the big event and all the hype surrounding it.

Had a great time hangin with Coach Vrabel of the @titans chatting about the #NFLDRAFT here in #Nashville this week. We’re gonna have fun Friday night at our show on Broadway!

A Special Guest With Tim In Spirit

McGraw wasn’t just a passive fan of the draft…he also offered to perform a free concert on Broadway during its second night (Friday, April 26). But rather than wait until his show date to turn out and celebrate the draft, McGraw decided to attend the first night (Thursday, April 25) as well.

The country singer got all dressed up in nice gray suit, and accessorized his look with a blue pocket square and tie, his signature black cowboy hat, and a special piece of sports memorabilia. That special item was a 1980 World Series ring that once belonged to his dad, MLB pitcher Tug McGraw.

Tim told me he loves Philly for the way they treated Tug and the passion and love they have for their athletes pic.twitter.com/qZLqxlkIVw

Tug passed away in 2004, so he sadly couldn’t attend the draft with his son, though he was certainly there in spirit. But Tim was far from alone, because he had two special guests with him to celebrate the draft’s first night.

However, neither one of those guests was his wife of 22 years, fellow country superstar Faith Hill.

Who Went To The Draft With Tim?

It isn’t all that uncommon for the stars to step out without each other, so it doesn’t come as a huge surprise that Hill wasn’t at the draft with her husband. When they are unable to attend events together, they’ll often bring one of their three daughters along as a date.

But it wasn’t Gracie, Maggie, or Audrey that Tim had by his side at the NFL Draft. Instead, he brought along his two extremely well-dressed nephews, who donned gray suits matching the one worn by their uncle.

The trio posed for a photo before taking off to the draft, and proud Uncle McGraw made sure to share it on social media.

Headed to the #NFLDraft with my nephews!

Later in the night, McGraw shared another photo with his youngest nephew, showing just how much fun they had together at the draft. Apparently the two had challenged each other to a staring contest, and despite his best effort, McGraw lost.

His eldest nephew can be seen in the background of the photo, and the shocked expression on his face is priceless!

Stare down with Samuel hangin at #NFLDraft…I lost.

We’re so happy to see that McGraw and his nephews had a fun time celebrating the NFL Draft. They’re sure to remember that night forever!

Before you go, be sure to check out the video below, which shows McGraw being interviewed on the red carpet at the NFL Draft. In that interview, he talks about his lifelong passion for football and how happy he is that the draft came to Nashville.

We’re sure McGraw’s nephews feel the same way about the draft as he does!