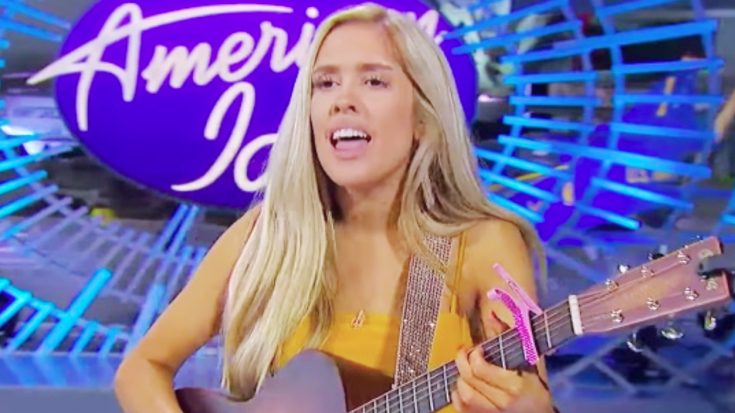 One young singer not only impacted the judges of American Idol with her performance of a country music classic, but with the emotional life story that led her to that audition room.

It was clear that the talented Texas college student never would have been standing there in that moment if her life had played out differently.

Laci Kaye Booth’s mom and dad were only 17 and 15 when they found out they were expecting a baby. That baby was Laci, and by the time she turned three her mother and father had split up.

Her dad, a singer and musician, was often unable to visit Laci as he was busy traveling for various performances. The two were separated more often than they were together, which was hard for Laci to understand.

But as Laci grew older, she desired a closer relationship with her dad. He was on the same page, because when she was 15 years old, he asked if she’d like to join him for a recording session.

Their reunion was surely an emotional one, and led to a father-daughter road trip that strengthened their bond and their love of music.

“Music really made up for that lost time, and it means the world to me, because I couldn’t ask for a better family, a better support system,” Laci said.

Now 23, Laci’s musical reunion with her father inspired her to audition for American Idol. As if her name and Texas hometown didn’t make her country roots clear enough, she told the judges that she grew up listening to iconic 1990s-2000s female country artists such as Shania Twain and the Dixie Chicks.

But Laci threw it back even further for her audition, opting to sing one of Merle Haggard‘s most iconic songs, “Mama Tried.”

“Mama Tried” is one of those songs that you’ve heard over and over again, since it is pretty popular to cover. But we guarantee you’ve never heard it performed the way that Laci does it.

Laci showcased her voice in a way that made her stand out from all other competitors. She has a natural husky, shaky sound that judge Luke Bryan said they didn’t see “from any girl” country singer last year. He went on to praise her further, saying he thinks she is “really, really close to just being a really world-class [singer].”

Judge Katy Perry had equally nice things to say, telling Laci she was a “diamond in the rough” among the contestants that had auditioned for them so far.

Based on those comments, it should come as no surprise that the judges gave Laci the golden ticket to Hollywood! Her dad had been waiting outside the audition room, and came in to congratulate her after she shared some hugs with the judges.

Talk about an emotional moment! You can watch Laci’s outstanding audition and learn more about her life story by tuning in to the video below.