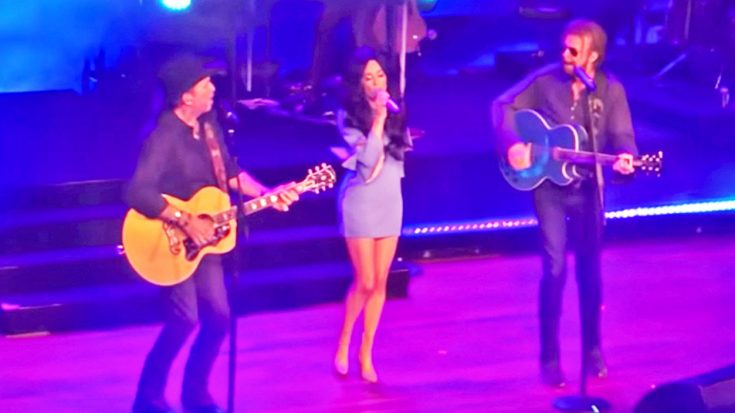 The trio you never thought you needed just stole the hearts of Nashville with one incredible performance. While stunning the audience with her golden vocals, Kacey Musgraves surprised fans with two of country music’s favorite guests. From the moment that dynamic duo, Brooks & Dunn took the stage, fans couldn’t control their excitement – all the way until their exit.

It’s been over 10 years since Brooks & Dunn have released a studio album, so when fans heard about their newest project, Reboot, they were over the moon. Their new album will be the farthest thing from ordinary though as the duo has invited several of country music’s biggest stars to join them on the tracks.

While the duo has released some of the revamped hits before, the album officially dropped on April 5. One highly anticipated track was the guys’ 1992 hit, “Neon Moon” which features six-time Grammy Award-winning, Musgraves.

Luckily for one venue of fans, they got a glimpse into just how phenomenal these three talents sound together live.

While performing at the Ryman Auditorium on March 1 2019, Musgraves stood in the middle of a darkly lit stage and began singing “Neon Moon.” Without any notice, Brooks & Dunn came up from behind her and illuminated the venue. As the trio began harmonizing with one another, the crowd went wild.

Almost immediately, every member of the audience was singing along. Trust us – you’ll get chills.

Eager to get your hands on the new Reboot album? You can download it here.