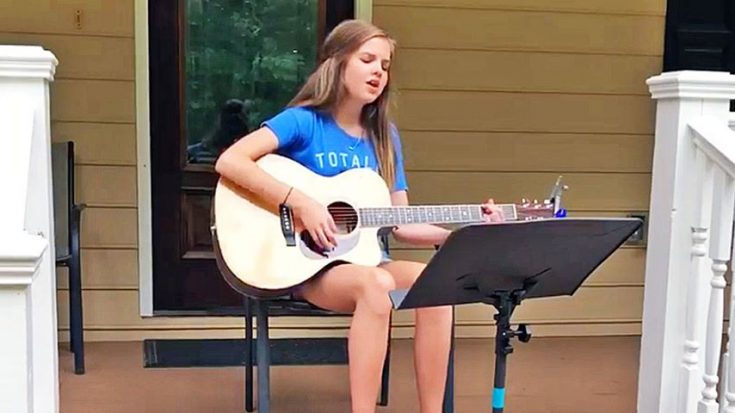 Sitting on the front porch of her home somewhere on the outskirts of Atlanta, Callista Clark might be mistaken as your average local teen – however, she is anything but average…

14-year-old Callista, who has been singing forever – or as long as she can remember. Over time, she gained a pretty strong fan base and even takes requests! She has gotten a bunch of fans on social media asking for Randy Travis‘ “I Told You So.” Their wish has finally come true.

With her heavenly voice and impressive guitar pickin’ skills – Clark delivers Travis’ classic hit song like she means it, though she’s hardly old enough to have experienced the gut-wrenching heartbreak Travis laments.

With soulful emotion and a desire to entertain fans, Clark covers this 1988 hit as if she’d sung it 100 times before.

Travis’ hit has been covered by notables such as Carrie Underwood, Keith Urban, and the unforgettable Aretha Franklin, just to name a few.

Watch Clark’s full video below. Listen to the raw, unbridled power behind her voice. She’s truly a star in the making and this recording is just as her thousands of fans agree, Callista Clark is “sooooo talented.” Can’t wait to hear more. How about you?

What do you think this young lady’s cover of “I Told You So?”