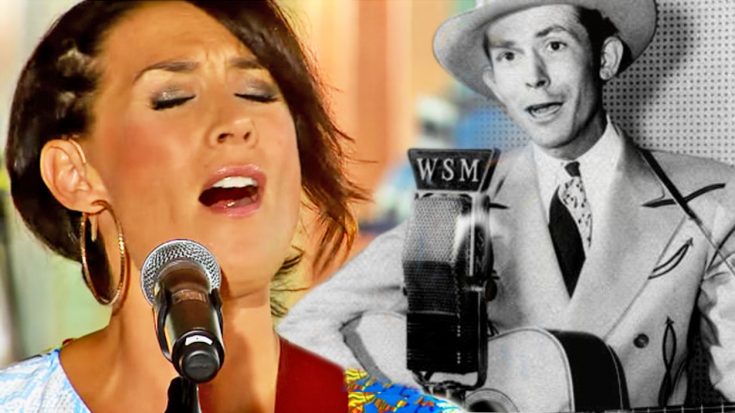 Hank Williams may have been an American country music singer, but artists from all over the world have been influenced by him. One international singer who considers the late, legendary singer a hero is Swedish country star Jill Johnson.

She has had quite the career in Sweden, releasing 17 albums since her 1996 debut, and representing her country in the Eurovision Song Contest two times, which is the longest-running annual international TV song competition. She is one of Sweden’s most successful artists with several Gold and Platinum records under her belt.

Performing on the Swedish television program Sommarkväll in 2013, Johnson performed a stunning rendition of the classic Hank Williams song “I Can’t Help It (If I’m Still In Love With You).”

Williams released  the song in 1951 and it sky-rocketed to the number two spot on the Billboard country singles chart. It has since been recorded by many legendary singers such as Ray Price, Elvis Presley, Kitty Wells, Patsy Cline, Jerry Lee Lewis, Hank Williams Jr., Dean Martin, Johnny Cash, Loretta Lynn, Conway Twitty, and many more.

Johnson stayed true to the classic country sound of the song by including a lap steel guitar solo and a band consisting of upright bass and acoustic guitar. Not many women have recorded the song, but it is absolutely perfect for a female’s soprano voice, as Johnson has proved in the performance.

Watch her take on “I Can’t Help It (If I’m Still In Love With You)” below.