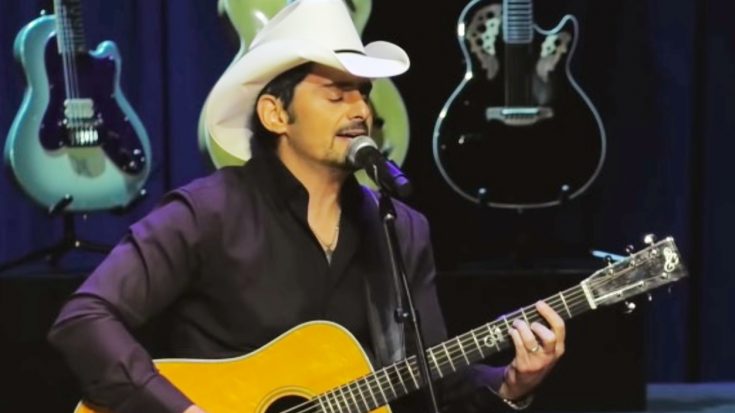 Whenever a major country music star passes away, it’s almost guaranteed that a large, public memorial service will follow. These services often take place at the Grand Ole Opry, with other artists gathering to perform the departed’s most iconic songs.

These memorial services untie friends, family, fellow artists, and fans in their grief, as many pack the venue to bid a final goodbye to the one who passed. Sometimes these services are even filmed and shared online, as was the case at the memorials for George Jones and Troy Gentry, among others.

But after Glen Campbell passed away on August 8, 2017, his family chose to host a private memorial service at the Country Music Hall of Fame instead. Whispers surfaced that there were tribute performances at the memorial, but no footage ever surfaced.

Finally, on the one-year anniversary of Glen’s death in 2018, his family shared a bit of the footage from his memorial. And the footage features a profound medley tribute from none other than Brad Paisley.

In a short statement posted to careliving.org, the website headed by Glen’s widow, Kim, the story behind the clip and its release was explained:

“Several of Glen’s friends and colleagues spoke and performed that evening, and the Campbell family is honored to share Brad Paisley’s tribute with the CareLiving community in honor of of the one year anniversary of Glen’s passing on August 8th.”

Actress Jane Seymour introduced Brad before he made his way out on stage. Before he sang, he felt the need to say a few words about what Glen meant to him, and to country music as a whole.

As Brad shared, the first time he ever sang in public (he was only ten years old), he performed one of Glen’s songs. “My first performance was ‘Try a Little Kindness,’ and I was hooked,” Paisley said, before going on to add that he always wanted to be like Glen.

With that, Brad moved into his acoustic tribute to his musical hero, starting with the Eddy Arnold song “I’ll Hold You in My Heart,” which Glen covered. It was the only song Brad circled back to in the medley, singing it at the beginning, middle, and end.

The other songs Brad sang included the upbeat “Southern Nights,” a tender rendition of “Rhinestone Cowboy,” and the beloved hymn “In the Garden.” Through each song, you can see the care that Brad put into every note, wanting to do Glen justice with his performance.

We’d say he did so, and you’re sure to agree when you watch his tribute below. Thanks to the Campbell family for deciding to release this footage, because it’s so precious to watch.