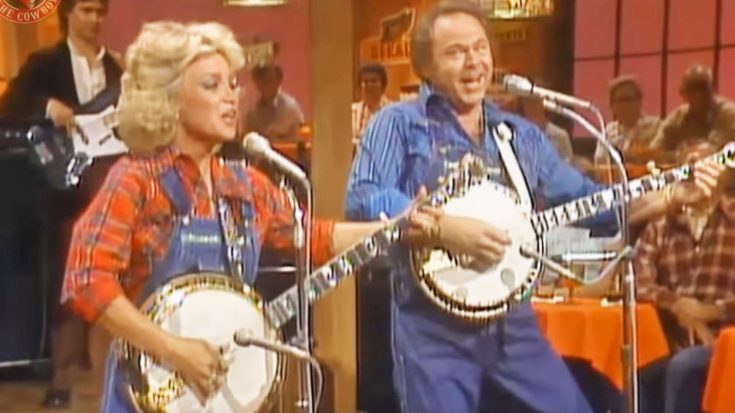 Over its span of 25 episodes, the American classic, Hee Haw invited some of country music’s favorite stars on set. While the hilarious skits and witty jokes brought endless comedy to the show, it was the performances that really got the crowd excited. From country legends to rising acts, making it on the Hee Haw stage was the ultimate gig.

One memorable performance was from the country trifecta, Barbara Mandrell. The blonde beauty served up her talents for years even having her own prime-time TV show. Eventually becoming one of country music’s most successful female vocalists of her time, she had earned her title fair and square.

Known for a series of #1 hits including, “Sleeping Single in a Double Bed,” “Years,” and “Till You’re Gone,” Mandrell was dominating the industry. Being both an incredible singer and musician put her at the top of the ranks, one of her favorite instruments being the banjo.

Luckily, her dear friend and Hee Haw host, Roy Clark had some banjo pickin’ skills up his sleeve too.

On a 1980 episode of the famous American classic, Mandrell and Clark gave fans one hell of a show. Standing side by side on the stage, Roy begins cracking jokes with the audience. Not long after, the two introduce the song “Goin’ Down This Road Feelin’ Bad” as they start fiercely picking their matching white banjos.

The two talents can’t stop smiling as they perform a rockin’ rendition of this classic tune. Mandrell hands off the mic to Clark for his banjo pickin’ solo. The blonde beauty even includes her own line in the tune making up her own words! One thing is for sure – these two had so much fun together.