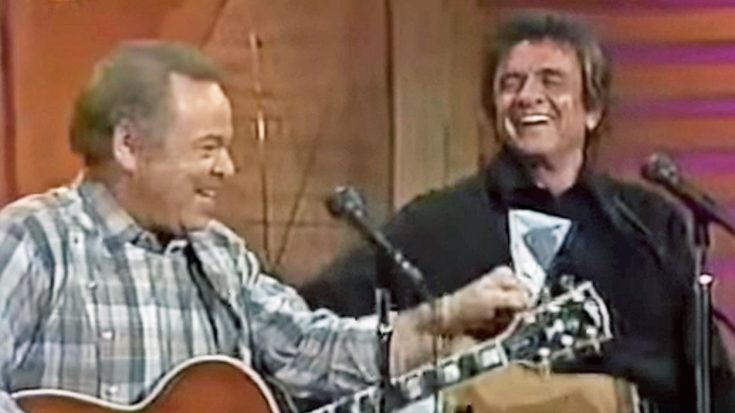 The legendary Roy Clark was a staple at Hee Haw. This comes as no surprise because he was the show’s host, but besides that, his hysterical performances were some of the fans’ favorite moments from throughout the show’s run.

A man of many talents, one of Clark’s acts that he brought to Hee Haw was first seen on the Jimmy Dean Show in 1964. He performed Johnny Cash’s “Folsom Prison Blues,” but put his own spin to it.

After singing the lyrics, “I hear that train a comin’, it’s rolling ’round the bend,” he played a guitar lick that sounded quite similar to a train, which got lots of laughter and applause from the crowd. Check out that performance below.

Fast forward some years, and Cash appeared on Hee Haw to perform with Clark and they sang “Folsom Prison Blues” together! Cash sang the first verse how he normally does it, but then Clark took over and performed in a hysterically unique manner that left everyone in a fit of laughter.

Along with making a machine gun sound with his guitar, he also flipped it on its side, grabbed a glass cup, and turned it into a slide guitar for the famous instrumentals that impressed even a legend like Cash.

Cash took the lead on the next verse, and as he was handing the reigns back to Clark, he said, “I can’t wait to see what you’re going to do now.”

And believe us, it was a sight to see! Watch their full performance below to see what Clark had in store for Cash in the last verse.