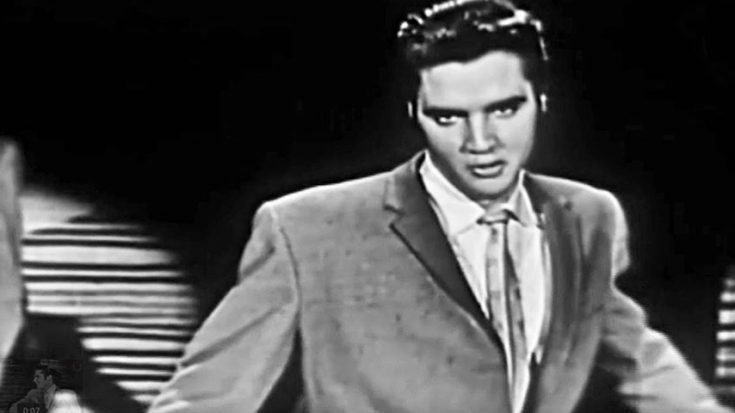 The year was 1956. The event was Elvis Presley’s second appearance on The Ed Sullivan Show and turned out to be history in the making. Elvis first appeared on the show on September 9 when host Sullivan, not a fan of controversy, was absent, recuperating from an accident.

Because of the incredible ratings, Elvis was invited to return a mere six weeks later. After his first  appearance, he was only filmed from the waist up.  It was the beginning of a moral controversy.

Elvis’ gyrating hips, actually a habit borne out of stage fright, originally defined the rising young singer, making show hosts and parents of teens nervous and in some cases, disgusted. The New York Herald Tribune went so far as to call the singer “untalented and vulgar.” Elvis was about to change the course of musical history with a few wiggles and giggles.

During this appearance on television, 21-year-old Presley, much to the delight of the screaming audience, performed “Don’t Be Cruel,” which eventually became a four-time platinum single (backed by “Hound Dog.”) Elvis was anything but cruel as he laughed and jiggled his way through the lyrics.

As a follow up, Elvis thrilled the live audience with the theme song from his new motion picture of the very same title. “Love Me Tender” was a sentimental Civil War ballad, the first non-rock ballad of Presley’s career. In the movie, the history-making star played the youngest of four brothers who stayed behind to care for his mother and family while the older siblings went off to fight in the Civil War. He sang this song to his mother and young bride.

History In The Making

The record, the only one in history to do so, went gold before the movie was even released. Such was the power of Elvis Presley.

Take a look at this video and tell us what you think of young Elvis’ performance. Why do you think people were so upset? Is there anything you would compare it to today?

Check out his third and final appearance on The Ed Sullivan Show on January 6, 1957 below, where his performance is “censored.”