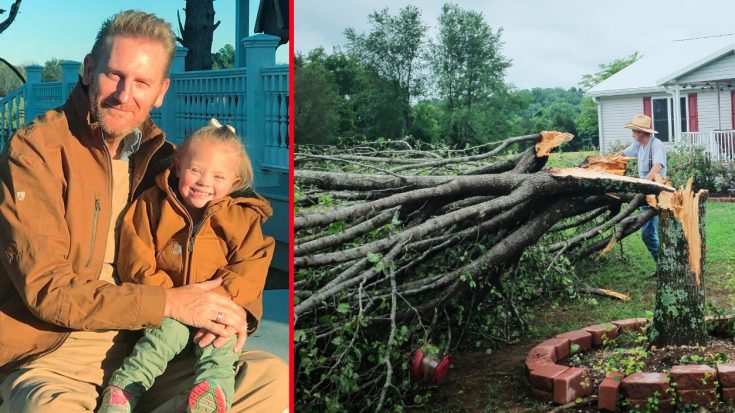 In a blog post titled “a mighty wind,” country singer Rory Feek went into detail about a storm that came over his Tennessee farm.

For many years, he shared this farm with his wife Joey. On June 15, they would have been married 17 years, which he celebrated with a moving post on Facebook along with some photos of their special day.

…seventeen years ago today we stood at the alter and vowed to love each other ‘til death do us part’. We were young,…

Joey passed away in March 2016 after a long and hard-fought battle with cancer.

On Monday night (June 17) right before the sun went down, “a big storm” came through the Feeks’ beloved farm. Winds as high as 60mph, along with hard rain damaged a few different spots on the farm, which has a school, a church, their house, among other things on the property.

Luckily, Rory and his three daughters Indiana, Heidi, and Hopie, were in Alabama when the storm rolled through.

Upon their return to the farm Tuesday morning (June 18), they found out just how bad the damage was.

Joey’s “potty shed” was knocked over, and so was a tree limb nearby

Trees in the backyard narrowly missed the back porch

To see all the photos of the damage, take a look at Rory’s blog post here.

Even though there was a lot of cleaning up to do on their farm, Indiana still had to go to school, which luckily had no damage. Trying to comfort her dad, Indiana told him, “It’s okay Papa… it happens sometimes.”

She is so sweet!

We will keep Rory, Indiana, and their farm in our prayers!

Watch their music video for “That’s Important To Me,” which was filmed on their farm, below.