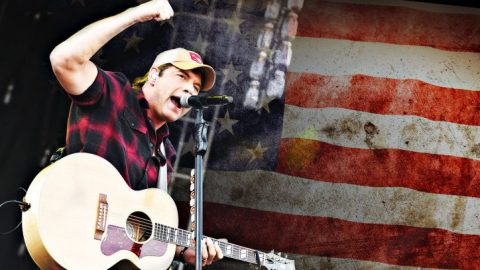 This powerful patriotic anthem is a solid home run that pays homage to the incredible blessings we are afforded by living in this amazing country.

Penned by two talented and illustrious songwriters, Brett James and Angelo Petraglia, this iconic American anthem is an upbeat, banjo-laden tribute to every wonderful aspect of life in the U.S.A.

Soaring high to the top of the charts, this unforgettable hit sung by none other than legendary Rodney Atkins surely strikes a chord with thousands of fans across the nation – and has become one of his biggest hits, to date.

Released as the title track and lead single from his 2008 album, “It’s America” touches on various aspects of life in America and reminds us of how fortunate we are to be living in the land of the free.

Highlighting some very-American traditions and parts of our culture, the song speaks volumes about the rights, privileges, and honors we have been given by those who have fought for freedom.

It’s a high school prom, it’s a Springsteen song, it’s a ride in a Chevrolet
It’s a man on the moon and fireflies in June and kids sellin’ lemonade
It’s cities and farms, it’s open arms, one nation under God
It’s America

‘Cause it’s a kid with a chance, it’s a rock ‘n roll band
It’s a farmer cuttin’ hay
It’s a big flag flyin’ in a summer wind
Over a fallen hero’s grave

No matter if you’ve heard this powerful patriotic song a hundred times or if you’ve never heard it before, it’s always worth another listen.